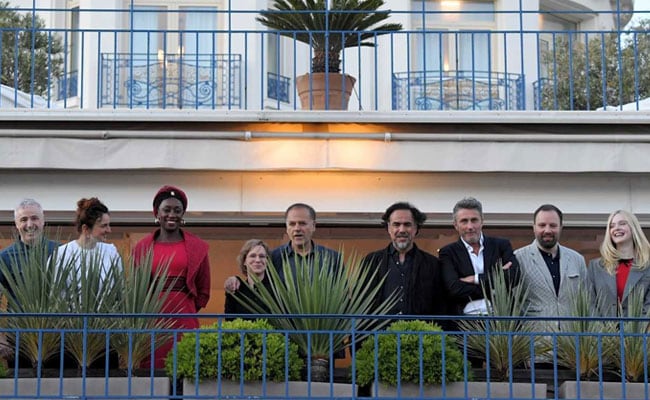 Cannes Jury pose on the balcony of the Martinez Hotel at the French Riviera. (Image courtesy AFP)

After years of living off their glamorous reputation, Cannes's five-star hotels are getting a $1-billion makeover to make them fit to host Hollywood's A-listers. With eye-watering room rates during the film festival -- which starts Tuesday - the French Riviera town's ageing grand behemoths are spending a fortune to get back their glitz. Its seafront strip, La Croisette, has become a long line of luxury boutiques in recent years, with top-end French and Italian brands like Chanel, Dior and Gucci vying for the jet set's petty cash.

But over the years, some of the town's historic hotels have been caught resting on their laurels - a fact not lost on clients.

"We went to sleep a bit," admitted Michel Chevillon, head of the Cannes hoteliers union, which counts 133 establishments among its members. "Bookings didn't fall but there was a drop in customer satisfaction levels. And then the big international chains arrived. "So to keep our share of the market, we had to get it just right," he added.

Huge sums are now being invested in the town's luxury hotels, Chevillon said, none more so than by the Qatari owners of the Belle Epoque Carlton hotel, whose domed turrets elegantly dominate the seafront strip.

Their spending on the facelift is likely to reach 300 million euros ($337 million), he said.

But such an outlay was crucial, Chevillon argued, admitting that the sector had "got into a bit of a rut".

He reeled off a string of hotels that have undergone major work or expansion in recent years - the Radisson Blu and the Marriott in 2009, then the Majestic in 2010 with a new wing.

The Martinez, Cannes biggest hotel with 409 rooms, reopened last year after an "unprecedented" 150-million-euro upgrade in which everything was redone.

Today, its swankiest suite costs 34,000 euros a night during the summer - a rate that soars to an undisclosed amount during the film festival.

"And if you look at all the smaller independent hotels, which account for half of the 5,500 rooms in town, and which have been investing all year round... you're not far from a billion euros over the decade," he calculated.

The myth of the French Riviera began in the late 19th-century when the European aristocracy began wintering there, with Cannes quickly becoming a destination to rival Paris, Barcelona, Vienna and Budapest.

Today its palatial villas are owned by Russian oligarchs and wealthy Gulf potentates, with Cannes a key destination on the luxury yacht circuit with Rolex, Louis Vuitton and Chopard just a few of the 70 top brands jostling for space along La Croisette.

It is also one of Europe's top conference destinations drawing thousands for MIPCOM, the world's biggest television and streaming market, and dozens of other prestigious events.

Buffing up 'the Bunker'

This week some 40,000 people from the world of cinema will descend on the town, among them 5,000 media professional, with hotels facing increasing competition from the explosion of private lets organised by the likes of Airbnb.

In such a competitive market, hoteliers need to stay ahead of the curve in terms of design, using fabrics and materials that are bang on-trend and technology that is cutting edge, Chevillon said.

"After five years, decor is no longer fashionable. After seven, it's not considered chic and after 10 it's somewhat obsolete," he added.

The Martinez has bet on an unusual mix of pastel tones to complement its Art Deco heritage, which no hotelier would have dared in the past.

The Palais des Festivals - where the films in competition are shown - has also undergone a major makeover.

Known as the Bunker, this white concrete colossus with tinted windows brings in an annual 865 million euros from more than 50 events per year, of which 190 million euros is generated by the film festival.

Hastily built in 1982, it has recently undergone 100 million euros of renovation work, with a further investment of 62 million euros due by 2024, to add another cinema on the sixth floor and revamp areas around the red carpet.

"It will never be the Louvre but it's definitely more attractive than it was," admitted Cannes mayor David Lisnard.