Cannes 2019: Hina Khan also showed us around her dressing room with several stunning outfits lined up for trials 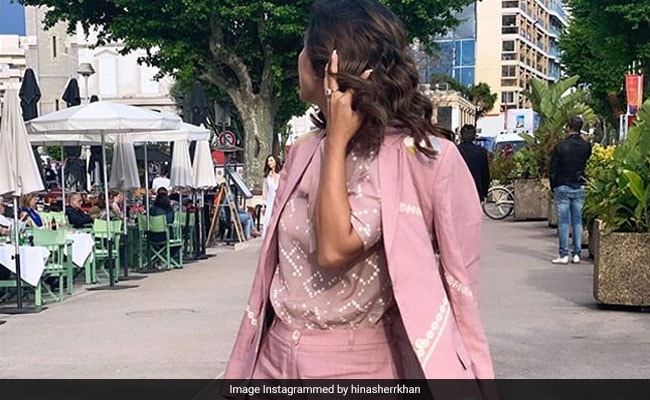 Hina Khan is yet to make her red carpet debut at Cannes but is having a blast in the French Riviera already. The TV star was spotted soaking up the sun and enjoying Cannes vibes on the streets of the French Riviera in her Instagram story. Hina Khan, pretty in pink, teased her fans and followers with only glimpses of her day look. For her first outing in Cannes - an interview session - she opted for an all-pink look and paired a pale pink blouse to go with her pink pants and blazer. A dab of beige was added to her look with those pumps. Hina Khan wore her hair in curls.

Hina Khan also showed us around her dressing room with several stunning outfits lined up for trials.

The former Bigg Boss contestant made a pit-stop in Paris before heading off to the French Riviera. Hina Khan lived her Parisian dreams as she posed with the Eiffel Tower in the backdrop - she was simply rejuvenating herself for Cannes, actually, like she wrote in the caption: "Just Be... Restoring my energy... Before it begins."

Meanwhile, Hina Khan, who famously featured as Komolika in the new Kasautii Zindagii Kay, has temporarily quit the show for pending projects. Her Kasautii co-stars Parth Samthaan and Erica Fernandes shared cute farewell messages for her on Instagram.

Although we gelled up pretty much towards the end but overall ..to be honest .. I did learn a lot from you @realhinakhan on every scene that we shot ..(learnt probably more than you learnt from me ) anyway..Wish you a great journey ahead with lots of happiness ..see you soon ..God bless you #farewell #komolika #bts #kasautiizindagiikay @starplus @balajitelefilmslimited

The Cannes Film Festival this year, scheduled from May 14-May 25, will also have Diana Penty making her red carpet debut. Cannes regulars such as Aishwarya Rai Bachchan, Sonam Kapoor and Deepika Padukone will also attend the film festival this year and so will the likes of Huma Qureshi and Mallika Sherawat.