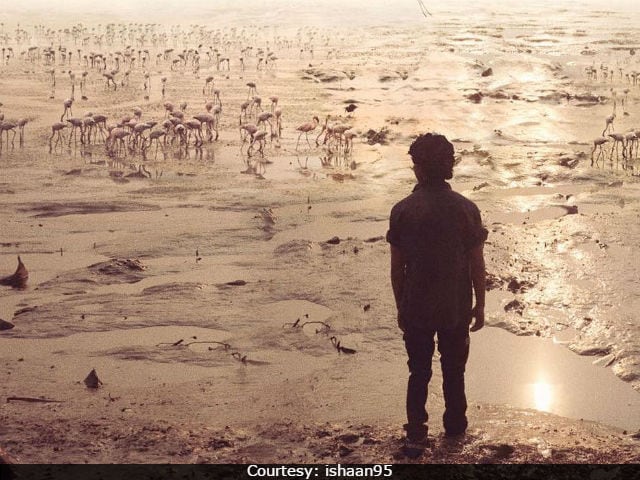 Ishaan Khattar in a poster of Beyond The Clouds (Courtesy: ishaan95)

New Delhi: The second poster of Iranian filmmaker Majid Majidi's upcoming India-set film Beyond The Clouds, will be unveiled at 70th edition of Cannes Film Festival, reports news agency IANS. Beyond The Clouds stars Shahid Kapoor's half-brother Ishaan Khattar and Malayalam theatre actress Malavika Mohanan in the lead roles. The shooting of the film was completed few weeks ago in Mumbai and is currently in the post-production stage. "The makers of the film are planning a unique marketing strategy for the film around its posters. They plan to release a series of teaser posters one by one unveiling a different looks and textures dedicated to the characters of the film. After the beautiful first poster and now the second poster at Cannes, we can expect a few more in the next few months," IANS quoted a source as saying.

The first look of the film, which was unveiled in February, was launched at the 67th Berlin International Film Festival. "This poster is Majidi's vision for the film and his special showcase of India seen from his lens and sets the tone of the project that the viewers can look forward to," the makers of Beyond The Clouds earlier told IANS. Here's the first poster.

Ishaan and Malavika star as siblings in the film. Beyond The Clouds focusses on the relationship of a brother and sister.

Beyond The Clouds is Majid Majidi's first film to be shot in India. It is jointly produced by Zee Studios and Eyecandy Films.

Promoted
Listen to the latest songs, only on JioSaavn.com
The Cannes Film Festival is will commence this week and will conclude on May 28. Bollywood actresses like Aishwarya Rai Bachchan, Deepika Padukone, Sonam Kapoor and Shruti Haasan, will be a part of Cannes 2017.