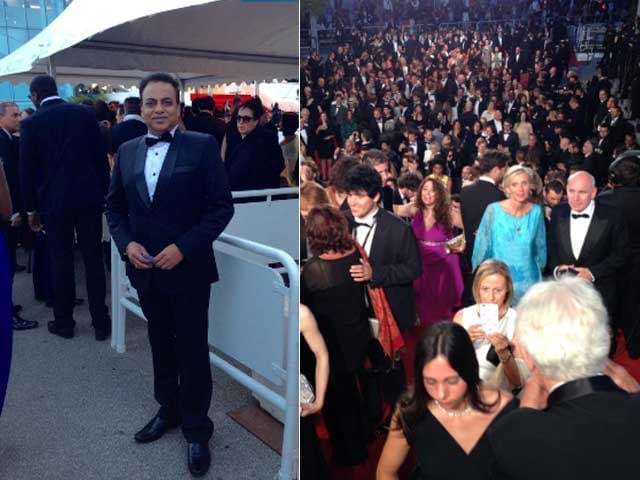 This image was tweeted by @silarindam

Kolkata: Keen to make a mark in the global arena, the West Bengal government is scouting for business opportunities at the 68th Cannes International Film Festival, an official said on Friday.

The state government has roped in actor-director Arindam Sil to woo production houses to shoot their films in the state.

According to state Information and Cultural Affairs Secretary Atri Bhattacharya, Mr Sil left for Cannes on May 18 and is actively engaging and liasoning with production houses and filmmakers.

"The target is to get business so that we can show what Bengal has to offer in terms of shooting destinations," Mr Bhattacharya said.

Arindam Sil has been actively tweeting updates about several of his activities in the film gala, where as many as six Bengali short films are being screened.

Kolkata has been highlighted in some major Bollywood projects including Shoojit Sircar's Piku and Dibakar Banerjee's Detective Byomkesh Bakshy!.

Chief Minister Mamata Banerjee has repeatedly stressed on turning the state into a top filming destination for Bollywood and Hollywood ventures and has promised to provide the best facilities for production houses.

However, the picture is not all rosy.

Promoted
Listen to the latest songs, only on JioSaavn.com
In December last year, Bollywood filmmaker Kushan Nandy had scrapped the filming of Babumoshai Bandookbaaz, starring Nawazuddin Siddiqui, in Bengal's Burdwan and Birbhum districts following problems with technicians from the state.

Earlier, Bikash Ranjan Mishra (Chauranga) and Mrityunjay Devvrat (Children of War) withdrew their film units from the state. Mr Mishra had sympathised with Mr Nandy over the incident via Twitter.