Manisha Koirala was last seen in Prassthanam, opposite Sanjay Dutt 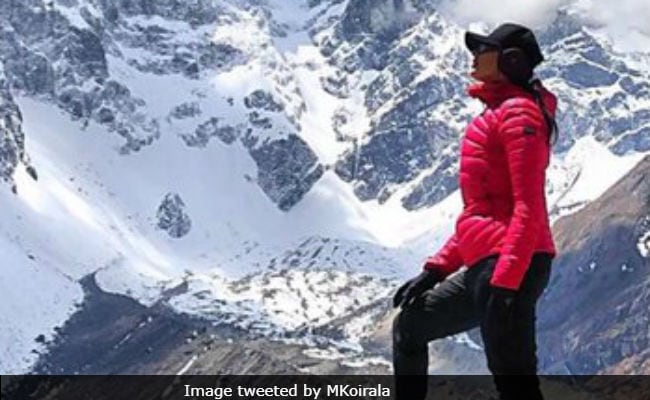 Inspirational can't even begin to describe actress Manisha Koirala's latest tweet about "second chances." The 49-year-old actress, who battled cancer, shared her post on her Twitter profile on Sunday, in which she wrote that she is "grateful" for the second chance that life bestowed upon her. Manisha Koirala shared a picture collage, which featured a picture of her from the days when she was undergoing cancer treatment, juxtaposed with a relatively new picture, in which she can be seen standing on a snow-capped mountain. Ms Koirala captioned the post: "Forever grateful for second chance to life. Good morning, friends. This is an amazing life and a chance to live a happy and a healthy one."

Manisha Koirala, who was diagnosed with ovarian cancer in 2012, has written about her ordeal with the ailment and her journey of coming out as a survivor in the book Healed: How Cancer Gave Me A New Life, which was published last year. In an interview with news agency IANS earlier this year, Manisha Koirala said, "When I was diagnosed with cancer that time, I was traumatised but when I look back, I feel it has given me new perspective to see life in a different light and lot of hope about many things in life. It also made me realize that how important my life and health is to me."

Manisha Koirala stepped into Bollywood with the 1991 film Saudagar and she has enthralled the audiences with her performances in films such as 1942: A Love Story, Bombay, Akele Hum Akele Tum, Khamoshi: The Musical, Dil Se.. and Mann, to name a few.