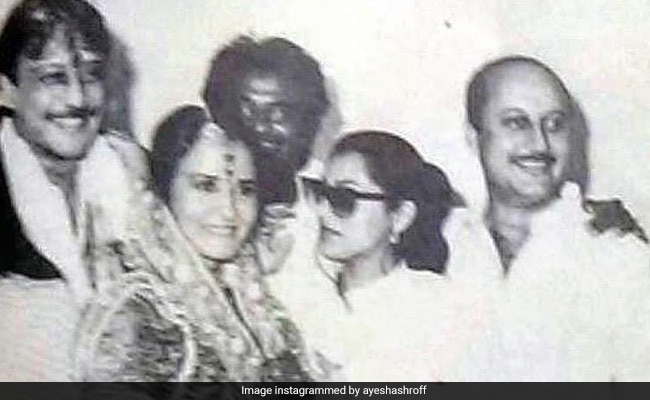 Ayesha Shroff's latest Instagram entry deserves everyone's attention. Why, you ask? Well, it is not every day that we get to see stars like Rajinikanth, Dimple Kapadia, Anupam Kher and Jackie Shroff in the same frame. On Saturday night, Ayesha Shroff shared a million-dollar throwback picture from her and Jackie Shroff's wedding and it features some of the biggest stars. Sharing the priceless picture on her Instagram profile, Ayesha Shroff wrote in her caption: "Wedding day with some of our oldest friends. Dimpi, Rajini gaaru,Anupam."

Wedding day with some of our oldest friends dimpi, rajni gaaru,anupam

Jackie Shroff married his long term girlfriend Ayesha in 1987. The actor is well-known for his films like Hero, Ram Lakhan, Rangeela, 1942: A Love Story, Mission Kashmir, to name a few. His wife Ayesha Shroff, former model and actress, is a film producer. She was the producer of films like Jis Desh Mein Ganga Rehta Hai, Boom, Grahan among others. The couple are parents to Bollywood actor Tiger Shroff and daughter Krishna.

On the work front, Jackie Shroff was last seen in Prassthanam, co-starring Sanjayt Dutt. He also featured in Prabhas and Shraddha Kapoor's Saaho and Salman Khan's Bharat, this year. The actor will next be seen in Radhe: Your Most Wanted Bhai, starring Salman Khan, Disha Patani and Randeep Hooda.

On the work front, Rajinikanth will next be seen in Darbar, which will open in theatres on January 15 in three languages - Hindi, Tamil and Telugu.