Can You Spot All The Stars In Anupam Kher's Million Dollar Throwback Pic? 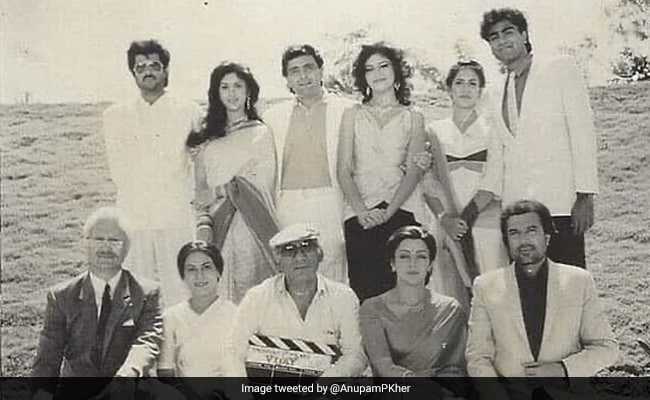 You can't claim to be a true blue Bollywood fan if you can't identify all the stars in Anupam Kher's million dollar throwback picture. The actor dug out gold from his photo archive on Tuesday and shared a rare throwback picture on his Twitter profile, which features the evergreen stars of Bollywood. The greyscale picture happens to be from the sets of the 1988 film Vijay, which was directed by Yash Chopra. The picture features Rajesh Khanna, Rishi Kapoor, Hema Malini, Anil Kapoor and Moushmi Chatterjee along with the film's director Yash Chopra. Anupam Kher revealed that he was 33-years-old when the photograph was taken and that he played Hema Malini's father, Rajesh Khanna's father-in-law, and Rishi Kapoor and Anil Kapoor's grandfather in the film.

The caption on Anupam Kher's caption read, "The group picture was taken at the shoot of Yash Chopra ji's Vijay. I was 33-years-old but I played Hema Malini's father. Superstar Rajesh Khanna's father-in-law, Rishi Kapoor and Anil Kapoor's grandfather. Originally, my role was supposed to be played by the true thespian of Indian cinema Dilip Kumar sahab. I felt honoured." He accompanied the post with the hashtags #throwback #memories #nostalgia.

Group pic of #YashChopraJi's VIJAY. I was 33years old. I played @dreamgirlhema's father. #RajeshKhanna's father-in-law. @chintskap & @AnilKapoor's grandfather. Originally my role was supposed to be played by the true thespian of Indian cinema @TheDilipKumar. #throwbackpic.twitter.com/pPTBV7fjWI

Anupam Kher, who played the onscreen father of Hema Malini and Raj Babbar in the 1988 film, won a Filmfare Award for Best Supporting Actor for his performance in the film. The Yash Chopra-directed film also starred Gulshan Grover, Shakti Kapoor and Meenakshi Seshadri in pivotal roles.