In the picture, then newlyweds Anupam Kher and Kirron Kher are surrounded by his family. 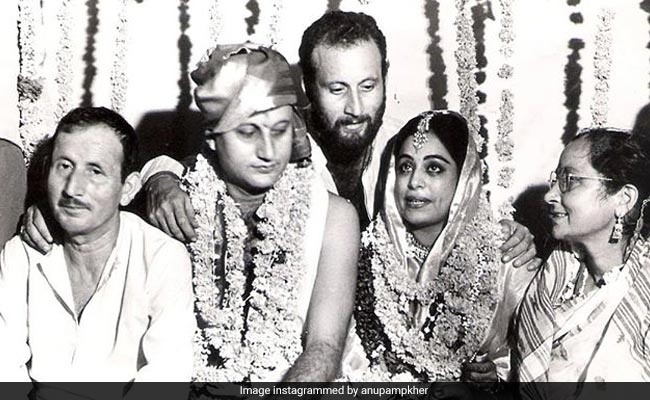 On their 34th wedding anniversary, actor couple Anupam Kher and Kirron Kher shared fabulous pictures from their black-and-white photo albums. Anupam Kher shared a major throwback picture from his wedding album to wish wife while Kirron shared another priceless picture. Anupam Kher's caption was as fabulous as the picture, in which he talked about spending a lifetime together with Kirron Kher. He wrote, "Dearest Kirron, Happy 34th wedding anniversary!! Bahut lamba waqt zindagi ka saath mei tay kiya hai humne. 34 saal guzar gaye lekin lagta hai Jaise kal ki he baat hai. I have loved the lived quality of our lives together." In the picture, then newlyweds Anupam Kher and Kirron Kher are surrounded by his family, including his parents Pushkarnath and Dulari Kher and his brother Raju.

Before getting married in 1985, Anupam Kher and Kirron Kher were briefly acquainted while she was studying theatre in Chandigarh, although Anupam Kher is an alumnus of New Delhi's National School of Drama. Before marrying Anupam Kher, Kirron Kher was married to businessman Gautam Berry from 1979 to 1984. Kirron has a son - actor Sikander Kher - with Gautam Berry, whom he raised with Anupam Kher.

Kirron Kher found success in films with her performance in Sardari Begum (1996) and she went on to star in movies like Bariwali, Devdas, Veer-Zaara, Hum Tum, Dostana and Khoobsurat to name a few. Kirron Kher is a member of parliament from Chandigarh for the Bharatiya Janata Party or the BJP.