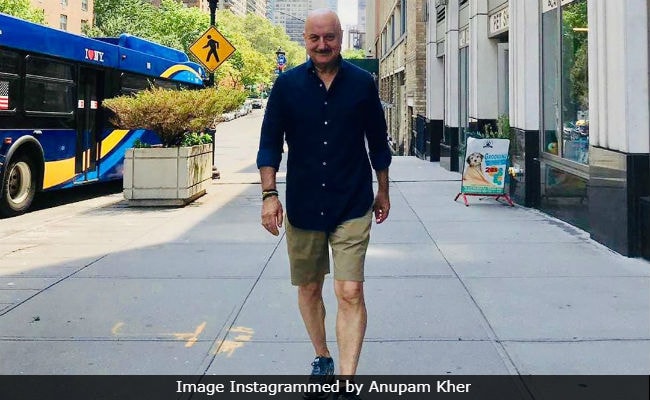 We absolutely love posts from Anupam Kher's New York diaries and his latest Instagram entry reminds us why. Anyone who has been following Anupam Kher on social media would be well-aware of the fact that it is not merely Bollywood stars that make appearances on his Instagram profiles. People from all walks of life feature on the actor's Instagram posts. On Wednesday morning, the 64-year-old actor posted one such picture from his New York diaries that we absolutely loved. He shared a picture of himself along with an adorable child named 'India.' The actor, who was delighted on meeting the kid, shared a photograph and he captioned it: "This adorable child's name turned out to be - India. So how could I not hold her closer to my heart." He accompanied the post with the hashtag #KuchBhiHoSaktaHai.

This adorable child's name turned out to be - INDIA. So how could I not hold her closer to my heart. #KuchBhiHoSaktaHai

Earlier this month, Anupam Kher shared a post from an exciting escapade, wherein a cab driver in New York failed to recognise the actor initially, However, he later identified the actor and gave the "most flattering and funniest reason" for it. In the video, the cab driver said that the reason he couldn't recognise Anupam Kher at once, is because the actor "looked like a 20-25 year-old boy." ICYMI, this is the video we are referring to:

The tall and the short of it.:)

During his New York visit, Anupam Kher met his friend and colleague Rishi Kapoor, who is undergoing treatment for cancer in the Big Apple. Here are the pictures from the meet:

Guess who came for lunch? I was delighted to have @neetu54 #RishiKapoor along with Santosh at my house for lunch. As Neetu ji rightfully commented that we never thought we will meet like this at my place in NY. But then don't I always say #KuchBhiHoSaktaHai. Dattu was over the moon to specially cook for them.

It was as always wonderful and inspirational to spend a beautiful evening with my friends @neetu54 and #RishiKapoor. Both of them are a great example of human endurance and triumph. Road to recovery, both, physical & mental is faster if there is love, care and determination. Well done. Jai Ho.

On the professional front, Anupam Kher was last seen in the political drama The Accidental Prime Minister. He also released his autobiography Lessons Life Taught Me Unknowingly recently.