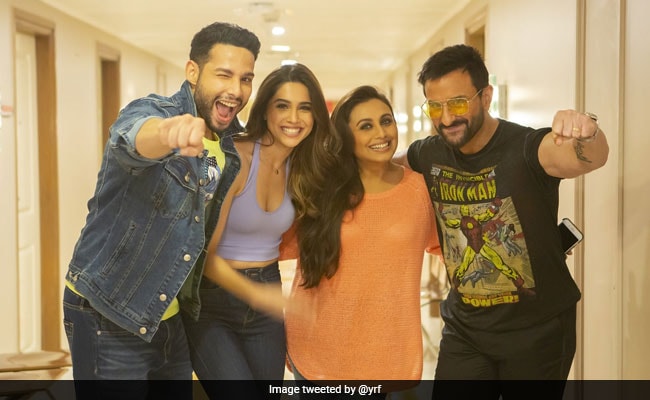 A picture from the sets of Bunty Aur Babli 2. (courtesy: yrf)

The team of Bunty Aur Babli 2 recently wrapped up the shooting of the film. Pictures from the film's last schedule were shared by the official Twitter page of Yash Raj Films, the production house which is backing the project. In the picture, Bunty Aur Babli 2 stars Saif Ali Khan, Rani Mukerji, Siddhant Chaturvedi and debutante Sharvari, can be seen happily posing together. The shooting was carried out while maintaining all the necessary safety measures, the tweet shared by YRF stated. "And it's a wrap! Bunty Aur Babli 2 crew wraps up shooting of the film with a fun song while maintaining safety measures," read the tweet shared by Yash Raj Films on Saturday.

And it's a wrap! #BuntyAurBabli2 crew wraps up shooting of the film with a fun song while maintaining safety measures. pic.twitter.com/RXHzIYD12h