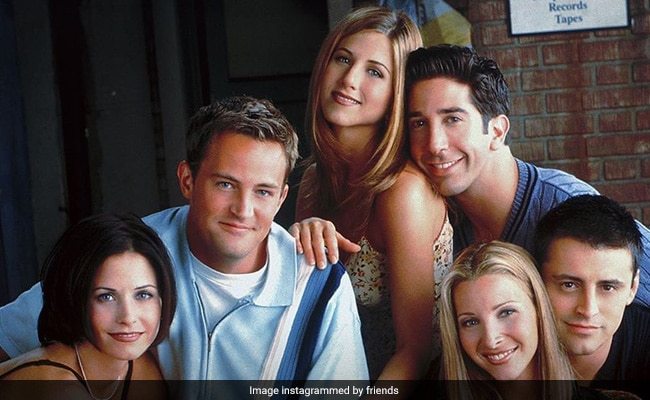 Jennifer Aniston in a still from F.R.I.E.N.D.S. (Image courtesy: friends)

It will be tough to decide if we are more happy about the fact that there's going to be a F.R.I.E.N.D.S reunion or the man who is (partially) responsible for it. A recent report by Closer states that Brad Pitt convinced actress and his ex-wife Jennifer Aniston to be a part of the F.R.I.E.N.D.S reunion. "After reuniting with Brad at her birthday last year, she asked him for advice. He said he thought it would be a great idea to honour their success and that fans still hold the show in such high regard," reported by Closer as cited by mirror.co.uk.

According to the report, Brad Pitt, who guest starred as the Rachel Green-averse Will Colbert in an episode of season 8 of F.R.I.E.N.D.S, encouraged the actress. "He told her it feels like the right time to get back together and encouraged her change of heart. He advised her to say yes' when everyone got together in October to celebrate the show's 25th anniversary," said the source, stated the report.

Jennifer Aniston, Courteney Cox, Lisa Kudrow, Matt LeBlanc, Matthew Perry and David Schwimmer are all set to reunite for 25th anniversary for an exclusive unscripted special on the streaming platform HBO Max (which will launch in May). Last month, Jennifer and other actors shared the big news on their respective Instagram profiles and they wrote: "It's happening."

F.R.I.E.N.D.S is undoubtedly one of the most popular sitcoms ever. The show first aired in 1994 and ran for 10 superhit seasons. It made stars of its six principal actors - Jennifer Aniston as Rachel, Courteney Cox as Monica, Lisa Kudrow as Phoebe, David Schwimmer as Ross, Matthew Perry as Chandler and Matt Leblanc as Joey. The sitcom followed the lives of six friends living in New York as they navigated personal and professional joys and tribulations, much of it converging around a coffee shop named Central Perk.

Jennifer Aniston has starred in several hit films like We're The Millers, The Object of My Affection, Just Go With It, Along Came Polly, Love Happens and She's Funny Like That among many others.