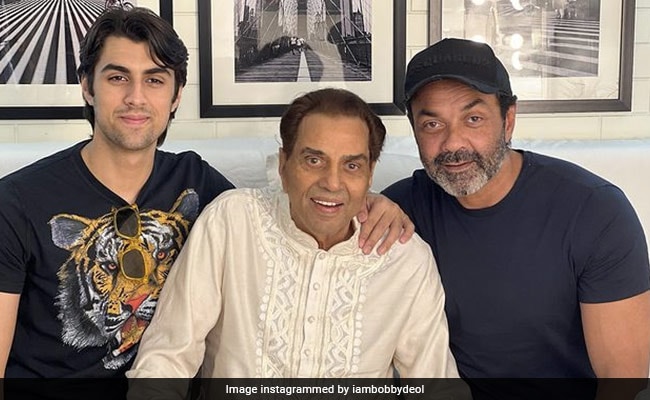 Fondly known as the He-Man of Bollywood, Dharmendra, who has entertained us for over decades, still continues to impress us with his charm. And, now, he has wrapped up the shooting schedule for Karan Johar's directorial comeback Rocky Aur Rani Ki Prem Kahani. To make the day a special one, his son, actor Bobby Deol and grandson Aryaman Deol paid a visit on the sets. Bobby has also shared a couple of snaps on Instagram. For the caption, Bobby wrote, “Was great to visit papa on his last day shoot of Rocky Aur Rani Ki Prem Kahani” He also tagged Dharmendra and added the hashtag “Aryaman Deol.”

A few days back, Alia Bhatt, who will be playing Rani in the film, wrapped her schedule for Rocky Aur Rani Ki Prem Kahani. On the occasion, Karan Johar shared a video on Instagram featuring Ranveer Singh and the actress dancing their hearts out. In the video, Alia can be seen performing the hook step of her husband, actor Ranbir Kapoor's song Channa Mereya. In the clip, Karan Johar tells Alia, “It's a wrap for you, what better song to say goodbye.” The filmmaker captioned the post, “A talkie wrap on my Rani. Watch Rocky cheer her on. And, excuse my excited and crazy camera moves. Rani ne kaam kar liya on this prem kahani! Ab Rocky tu bhi aaja wrap ke maidan me. The song selection is from my emotional library.”

Bobby Deol, in general, seems very close to his father Dharmendra. He often shares adorable posts showcasing his love for the veteran actor. Here's another cute picture that he dropped on Instagram where the two could be seen holding each other close.

Karan Johar and his Rocky Aur Rani Ki Prem Kahani posts featuring the lead pair Alia Bhatt and Ranveer Singh are too good to miss. On Ranveer's birthday, the director dropped a hilarious clip shot on the sets of Koffee With Karan Season 7. The opening season of the celebrity talk show featured Alia and Ranveer.  In the clip, the two are mouthing dialogues from the film Kabhi Khushi Kabhie Gham.  “It's our Rocky's rocking birthday and to make it even more special, we have his Rani by our side. Catch more of their laughter with me on the couch on the first episode of Koffee With Karan Season 7,” the birthday note read.

Rocky Aur Rani Ki Prem Kahani also features Shabana Azmi and Jaya Bachchan in crucial roles. Meanwhile, Alia Bhatt is also gearing up for the release of her film Darlings, which also marks her debut as a producer. She also has Brahmastra alongside her Ranbir Kapoor in her kitty.  Ranveer Singh, on the other hand, will next feature in Rohit Shetty's Cirkus.