"So many years later we are talking about his eight-minute part is just a testimony of his wonderful talent," said Abhishek Bachchan 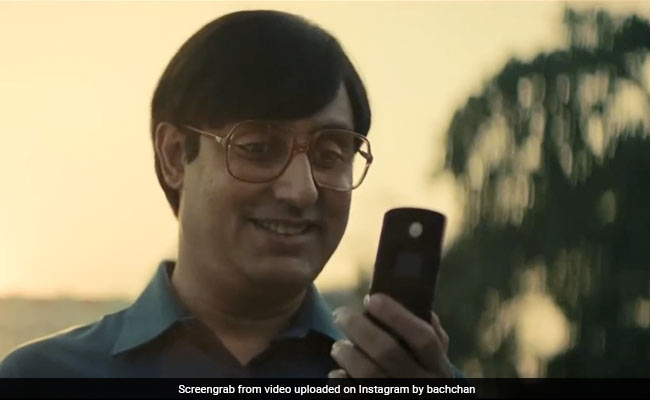 Bob Biswas: Abhishek in a still from the film. (Image courtesy: bachchan)

Bob Biswas, the mild-mannered contract killer from 2012's Kahaani, has his very own film now and it stars not the original actor Saswata Chatterjee but a Bollywood marquee name - Abhishek Bachchan. Speaking to NDTV, Abhishek revealed that he had not watched Kahaani when producer Sujoy Ghosh offered him a film about a hitman suffering from memory loss and that he realised the character was Bob Biswas once he received the script. Abhishek also said that he watched Kahaani during lockdown and hopes that Saswata Chatterjee, whose portrayal of the role he calls "brilliant," will approve Abhishek's version of the character. Also, fun fact - Sujoy Ghosh offered Abhishek Bachchan the role of Bob Biswas in Kahaani (which he directed and produced) but the actor was committed to another film.

Asked if he had discussed with Sujoy Ghosh why Bob Biswas 2.0 was offered to him, Abhishek Bachchan told NDTV, "Sujoy met me in early 2019 and said I have written a script that I want you to hear. It's was a story of a contract killer who has lost his memory and how his past catches up with him. I said sure this sounds like a good idea, I asked him, will you be making it? He said I will be producing it and my daughter Diya will be directing it. On an emotional note, I immediately said, yes I would like to do it, I will hear the script but I'm doing it. Then when I got the script I discovered it was Bob Biswas, I didn't know who this character was because I had not seen Kahaani. At that point in time, he also told me that he had spoken to me about the original Bob Biswas but at that time the film was not Kahaani and I was busy with Bol Bachchan. Once we finished 80% of the film we went into a lockdown that's when I watched Kahaani. Saswata ji is just brilliant. So many years later we are talking about his eight-minute part is just a testimony of his wonderful talent. I hope he sees my Bob and enjoys my interpretation of it."

When the makers were reaching the end of Bob Biswas, a national lockdown was announced and Abhishek Bachchan, who had put on extra kilos for the role of Bob Biswas, had to maintain his weight till they completed the entire film. "The physicality was a challenge. I had become 105 kilos to play Bob Biswas and to maintain that during the lockdown was very difficult. It's a good 15-20 kilos more than I am used to carrying on my body. It's just very inconvenient," Abhishek said.

Bob Biswas, known for the catchphrase he precedes each hit with - "Nomoshkar, ek minute" - is directed by Diya A Ghosh, daughter of Sujoy Ghosh who made Kahaani. Speaking about his experience of working with the next generation of filmmakers, Abhishek Bachchan said, "The new generation of directors are very prepared and have immense command over their craft. To see the level of command, sophistication, and refinement in storytelling is brilliant. The new generation is leaps and bounds ahead of us if you compare them to us when we started. We were all learning on the job, these kids come fully prepared."

If you haven't met Abhishek Bachchan's Bob Biswas yet, here's the trailer:

Bob Biswas co-stars Chitrangda Singh as the assassin's wife as well as Bengali stars Paran Bandopadhyay and Ditipriya Roy. The film will release in theatres and also stream on Zee5 this Friday. Abhishek Bachchan's next film will be Dasvi with Yami Gautam and Nimrat Kaur in 2022.