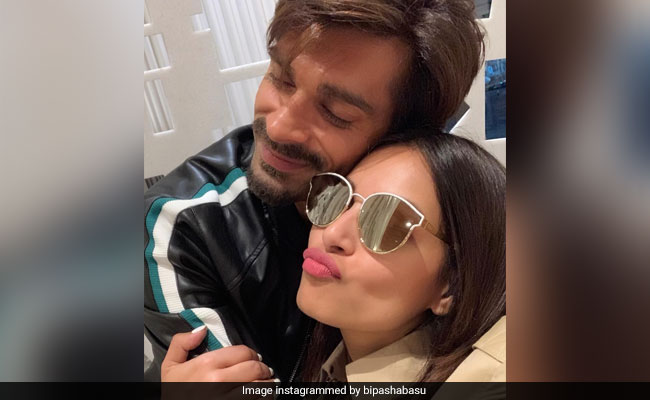 Bipasha Basu shared a few pictures of herself and husband Karan Singh Grover as she began the countdown to their 3rd wedding anniversary. The actress shared the pictures with the caption: "My everything. Thank you for being my love. 4 days to our 3rd Wedding Anniversary... Woo hoo." The couple got married on April 30, 2016 after dating each other for a year. She had met Karan Singh Grover on the sets of a horror film Alone in 2015. The movie was a remake of a Malayalam film. After Bipasha posted on Instagram, her husband Karan responded to the post saying, "Thank you, my love." Looks like Bipasha and Karan are going to celebrate their anniversary with a vacation as was revealed by the couple's friend Deanne Panday, who is a celebrity fitness trainer.

She also commented on the post wishing them a safe trip. She wrote in her comment: "Safe trip... have a super time you two."

My Everything Thank you for being my love 4 days to our 3rd Wedding Anniversary ... Woohoo #monkeylove #grateful

Karan Singh Grover too shared pictures of Bipasha Basu, which appeared to be from the same location as seen in Bipasha's pictures. Sharing three pictures of the actress together, the actor wrote, "Shades of monkey."

The couple is often seen sharing mushy pictures with each other on their social media accounts. Here are few posts from Bipasha and Karan's Instagram:

Happy Baisakhi to all from Us...May this year be filled with prosperity, abundance and success for all #happybaisakhi

My baby my baby #monkeylove

Earlier this month Bipasha Basu had shared a post featuring Karan Singh Grover, where she mentioned about working on a project together. She wrote in the caption: "Best friend and Super fun costar Karan Singh Grover, #bts of our upcoming film." Reverting to what Bipasha said in the post, Karan replied, "You're a super fun co-star too bestie!" Their colleagues like Dia Mirza, Natasha Radha Suri and filmmaker Siddharth Anand commented on this post, wishing them luck for the movie. The movie is reportedly titled as Aadat Diaries and is probably a horror film.

Check out what Bipasha had shared previously: