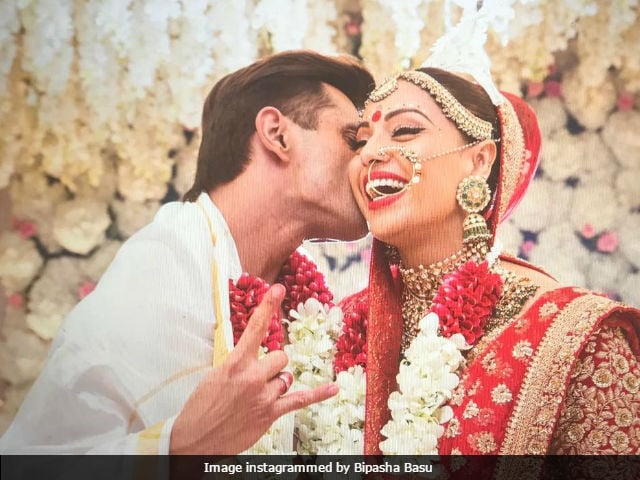 New Delhi: Actors Bipasha Basu and Karan Singh Grover celebrate their first wedding anniversary today. In the year they've spend as husband and wife, Bipasha and Karan have been almost inseparable (for proof look at their Instagram) except recently, when Bipasha joined her No Entry co-star Salman Khan on the Da-bang tour. Their wedding hashtag, which carried forward to their birthdays and vacations, was #MonekyLove and that's just how they've spent an entire year together - which much love and fun. If their Instagram posts are to be believed then Bipasha and Karan's first year as a married couple looks like an extended vacation. Jealous much? Well look at these pictures and you'll surely be.

Meanwhile, this is how the couple wished each other on their anniversary:

Some romantic moments (and captions):

Will miss this Hottie like crazy for the next few days...@iamksgofficial

Holding Hands through the good times and the bad...

Every day is special with you..

I love today Thank you for loving me... #Monkeyversary

When they compete for attention:

Yoga takes you into the present moment, the only place where life exists Bliss with my love#internationalyogaday #yogis #monkeys #acroyoga

Their first Holi, Diwali, Valentine's Day (and others) together:

Bipasha and Karan met while filming 2014's Alone and post the film's completion were often spotted in the same party/vacation group. Bipasha and Karan never denied or confirmed the dating rumours which strengthened after every outing but then, they suddenly announced their wedding date.

We are happy to finally share the good news with everyone . 30th April 2016 is the big day and we cannot thank our family,friends, fans and well wishers enough for all their love and support. The wedding will be a private intimate affair .Our deepest gratitude for respecting our privacy this far .We hope to have your continued blessings and warm wishes as we embark on this new journey together.Love Bipasha and @iamksgofficial .

Bipasha Basu and Karan Singh Grover's wedding extravaganza was spectacular and was spread over three days with ceremonies like puja, mehendi, sangeet all celebrated together, and with pomp and show. For her mehendi and sangeet, Bipasha wore a pink Anushree Reddy lehenga.

Their wedding ceremony was quite a show too. The groom made a hi-tech entry on a Segway while the bride kept the traditional way of entry. Bipasha glittered in a gold and red Sabyasachi while Karan wore sherwani with dhoti. Thiers was a traditional Bengali wedding.

Bipasha dated actors Dino Morea, John Abraham and Harman Baweja before marrying Karan Singh Grover. This is Karan's third marriage. He was married to actress Shraddha Nigam from 2008-2009 and Jennifer Winget from 2012-2016.
Promoted
Listen to the latest songs, only on JioSaavn.com