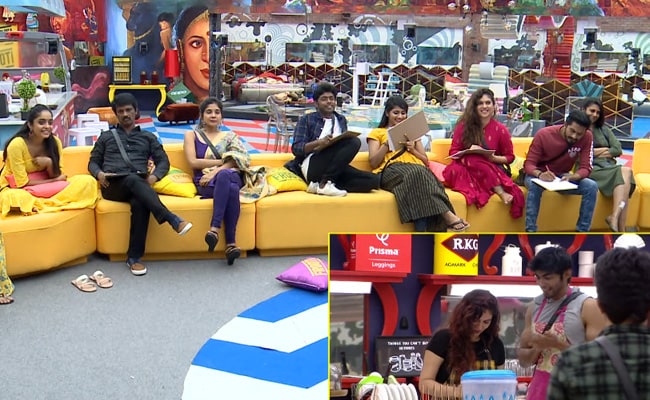 Bigg Boss Tamil Season 3, Episode 102: Contestants in a still from the show.

In another segment of the show, Bigg Boss decided to surprise the contestants by making them nostalgic. Audio clips of various events that occurred in the Bigg Boss house, were played and the finale contestants were asked to recall the situations when the related incidents took place. Sherin (courtesy a sharp memory), emerged as the winner of this 'Engayoo Ketta Kural' task.

That's not it, a series of videos were played from the show, which made the contestants super nostalgic. After watching the videos, Mugen spoke about the bond that he shares with Sandy and Tharsan while Abirami was seen expressing her affection for Losliya, who she considers a sister figure. Sandy extensively spoke about his special bond with Kavin and vowed to enter the finale stage wearing Kavin's medal. Sandy too stated that he would be happy to see Mugen emerge as the winner.

A promo video revealed that in tonight's episode, former Bigg Boss contestants Kavin and Tharsan will revisit the house. Seems like a reunion is in store for all theBigg Boss Tamil 3 contestants.