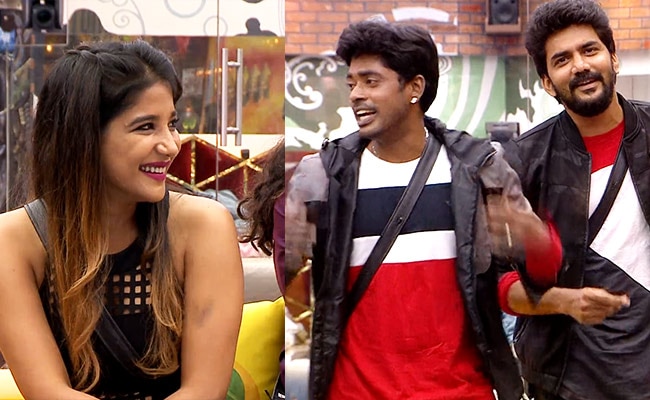 The weekend episodes of Bigg Boss Tamil 3 was filled with glimpses of Sandy and Kavin's performance and then there was the eviction of Sakshi. Sandy won the captaincy task and hence is now the captain of the Bigg Boss house for this week. It should be noted that this is the first time that Sandy will captain the housemates.

Bigg Boss asked Sandy and Kavin to compose a song for the contestants, who are on the eviction list - Losliya, Sakshi and Abirami. Eventually on Sunday, Sandy and Kavin entertained everyone with their song. But Cheran appeared unimpressed with the lyrics of their song as it referred to Cheran as a boring person.

Earlier in the Saturday episode, when show host Kamal Haasan was discussing the Abirami-Mugen issue, Abirami confessed her affection for Mugen. But Mugen explained that he is not in love with Abirami, whom he considers a good friend.

Kamal Haasan asked the housemates to name a winner for Bigg Boss on a jovial note. Tharsan, Madhumitha and Sandy topped the list. In order to acknowledge the 50th day of Bigg Boss, Madhumitha was given a medal as the second runner-up while Sandy got the medal for the first runner-up. Tharsan ranked first and received a medal too.

In the elimination round, it was Sakshi's turn to go. With some emotional moments, Sakshi exited the house. Meanwhile, Kavin apologied to Sakshi's father. Sakshi's father replied saying that Kavin need not apologise as he is just playing to win Bigg Boss.

The Bigg Boss promo for Monday's episode shows that the already evicted Vanitha will make a comeback to the Bigg Boss house. It is not clear whether Vanitha is making a guest appearance or a re-entry.

With the uber cool Sandy captaining the Bigg Boss house, Sakshi being eliminated and Vanitha making an entry, the upcoming episodes are going to be interesting.