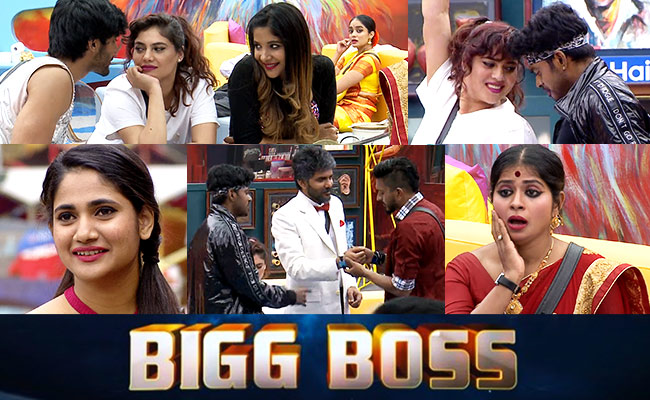 A still from Bigg Boss Tamil 3

The highlight of 37th day of the Bigg Boss house was the luxury budget. Each housemate was given a particular film character and they were required to impersonate them. Moreover, whenever a particular song was played, the housemates impersonating them, had to get on the dance floor and dance their hearts out. If any of the contestants failed to report to the dance floor within 15 seconds of the song, then their points would be deducted, thereby affecting this week's luxury budget.

Sandy was given the character from Simbu's Vallavan and was assigned the song Thattai...Thattai...Thattai from the film Manmathan. Bigg Boss house's Ajith from Mankatta and Vijay (from the film Pokkiri) were Kavin and Mugen respectively. The assigned song for Kavin was Aaluma Doluma from Vedalam and for Mugen, it was Aadungada Ena Sutti from Pokkiri.

Tharsan had to dance to the tunes of Ilamai Itho Itho while Cheran had to enact the character of Rajini from Mullum Mallarum and he had to perform to Raman Aandalum Ravanan Aandalum. Saravanan was assigned the song Kadaiveedi Kalakum while Sherin was assigned the character of Kushboo from Chinna Thambi and had to dance to the track Pottu Vaitha Kadhal Thittam.

Madhumitha had to impersonate Saroja Devi and had to showcase her dancing skills on the track Oru Pennai Parthu Nilavai Parthen. Meanwhile, Reshma had to dance to Vai Raja Vai from Panchathandiram. Losliya had to portray the role of much-loved Trisha from the film 96 and she was assigned the song Kattu Kattu Keera Kattu. Abirami had to dance to the tunes of Marainthu Irunthu Parkum Marmam Enna.

The song that was collectively allotted to the inmates was Ootikinu Kadusukalam. Bigg Boss in its sixth week. It is left with 12 of the original 16 contestants. The housemates who are a part of this week's eviction list are - Abirami, Kavin, Madhumitha, Reshma and Sakshi.