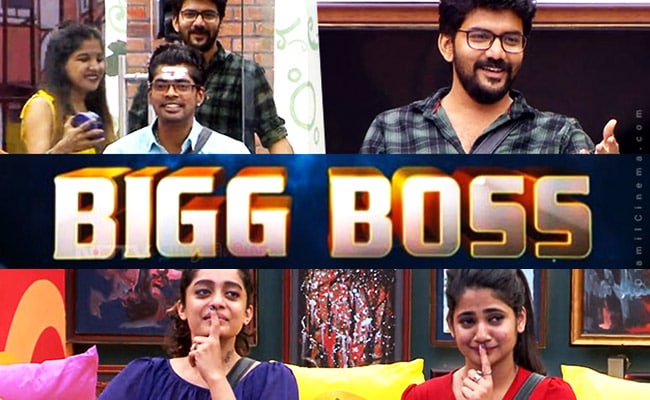 As usual the first day of the week was marked for nomination for this week eviction. It was expected Kavin would make the eviction list because of his controvery with Sakshi and Losliya that somewhat damaged his image.

The Sakshi-Meera episode was one of the highlights in the preceding week and eventually it came to light that Sakshi was the one who lied about the meeting saga. So, she was too expected to make the nomination list.

Kavin nominating Sakshi, Tharsan nominating Kavin, Mugen nominating Madhumitha were some of the surprising moments in the nominating process. At the end of nomination, Sakshi topped the list with 7 votes. Kavin and Abirami received 5 and 4 votes respectively for eviction nomination. Cheran, Saravanan and Meera were also in the nomination list. Meera who in the preceding week received 11 votes reduced the tally to 4 votes - all thanks to the shortfilm showcased by Kamal.

Losliya said 'sorry' to Kavin for her earlier words when she told Kavin was acting and wasn't real in the Bigg Boss house. The normal norm in the house is that when a contestant is sleeping during the day time, Bigg Boss would produce a sound of gun fire. Meera, Losliya, Abirami seemed to be in deep sleep and were awaken by the gun sound.

The fun part of the day was Sandy imitating Mohan. Mohan had left some of his clothes and belongings back in the Bigg Boss house before being evicted. Sandy used some of the clothes and stuffed them inside his shirt symbolizing the belly of Mohan. Wearing Mohan's clothes, Sandy's imitation of Mohan was too perfect. The way Mohan walks, talks, reacts were done to perfection by Sandy.

The task for the day was 'Pattu Padava...! Parthu Pesava..!' (A line from a famous Gemini Ganesan song). This task involved choosing a card from a bowl which contained Tamil songs and dialogues. The housemate who chooses the card should dedicate the so mentioned song and dialogue to a co-housemate.

Day 29 of Bigg Boss came to an end with Sandy, Kavin and Mugen singing a song in the empty swimming pool. It was one of those rare days when all was well in the house and no argument was exchanged.