Bigg Boss OTT: Contestants Dance With Karan Johar As No Eviction This Week

On the Sunday Ka Vaar episode, Karan Johar had the contestants put up dance performances and play some fun games. 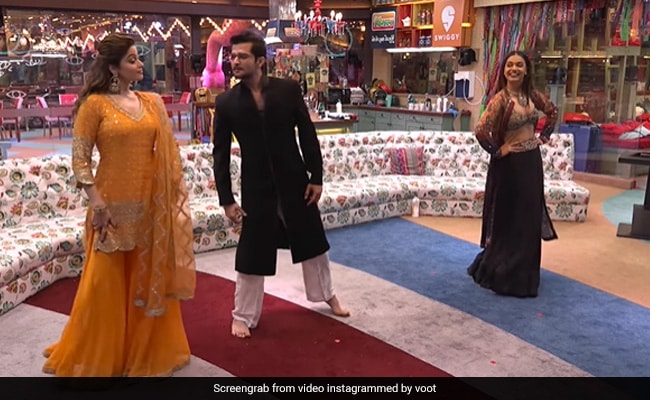 While most Sunday Ka Vaar episodes are all about schooling the contestants for the week that went by, things were slightly different this time around on Bigg Boss OTT. This week, contestants -- who have completed half their expected duration of stay in the house -- were free from the burden of eviction. As there was no elimination this week, it was all fun and games in the Bigg Boss house, in the presence of host Karan Johar. Dressed in their traditional Indian finery, the contestants even put up an elaborate dance performance for the audience.

Given that it is Janmashtami, the contestants decided to groove to hit Bollywood songs that had a Lord Krishna connection. So while, Shamita Shetty, Divya Agarwal and Raqesh Bapat danced to Radha Kaise Na Jale from Lagaan, Nishant Bhat and Moose Jattana led the team as they performed to Radha from Student of The Year 2.

Karan Johar lost no time to praise the contestants for their dance moves and the traditional looks on the episode.

Watch a glimpse of the performance here:

In addition to the dance performances, Karan Johar also played a few fun games with the group. The first game, which had contestants and viewers in splits, was called Photo Expose. With a bunch of photos of contestants captured at various instances, Karan asked the housemates to guess what was on the mind of the subject of the photo. As part of the game, Karan Johar also made Shamita and Raqesh dance to the actress' popular song Sharara Sharara from the film, Mere Yaar Ki Shaadi Hai.

The second game was a compatibility test of sorts that showed Akshara Singh and Milind Gaba do exceptionally well. Divya Agarwal, whose partner was removed from the house, was the judge for this round.

The third game was named Bewafai Ke Shots (shots of disloyalty). The game exposed the underlying dynamics as contestants were asked to give a shot of bitter gourd juice to housemates who they felt betrayed by.  While Raqesh Bapat and Shamita Shetty gave the shot to Divya Agarwal, Divya was given the opportunity to give two shots as she did not have a partner. Neha Bhasin gave the shot to Millind Gaba, whose pick was Neha as well.

The episode was also marked by the presence of actress Sunny Leone who shook a leg with Karan Johar and judged the contestants and their connections. When asked who she was rooting for, Sunny said Divya Agarwal as they had collaborated in the past for Spiltsvilla, a dating reality show.