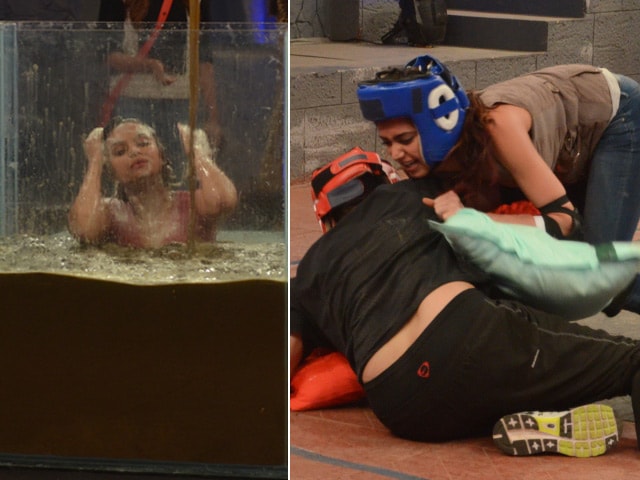 New Delhi: Bigg Boss is leaving no stone unturned to unleash the worst in the participants by each passing day. On the third day of their extended stay on the controversial game show, the challengers (Rahul Mahajan, Sambhavna Seth, Mahek Chachal and Sana Khan) continued their fight with the champions (Gautam Gulati, Karishma Tanna, Dimpy Mahajan, Pritam and Ali Quli Mirza) to gain control of the house.

As a part of Yeh Tera Ghar Yeh Mera Ghar task, the house was divided in five parts, four of which belonged to the champions. The challengers could access those areas with the express approval of the champions.

The day started with the task for control of the living area. Here, the champions had to resist an attack by the challengers in a boxing match. The contestants were given long sticks with gloves attached to each end, which they had to use to fight.

To gain access to the bedroom area, the challengers had to beat the champions in a pillow fight. Rahul decided to compete with Karishma.

Next up was the fight for restrooms. One contestant from each team had to sit in a glass chamber as diluted manure was sprayed on them. Each contestant was given a soap bar with which they had to scrub and finish within the stipulated time. Rahul took the challenge against his ex-wife Dimpy.

Promoted
Listen to the latest songs, only on JioSaavn.com
Lastly, the teams were directed to reveal their work from the previous day's task which involved stealing fruit to gain control of the garden area. The challengers finally accepted defeat as the champions won the task by gathering more fruit.