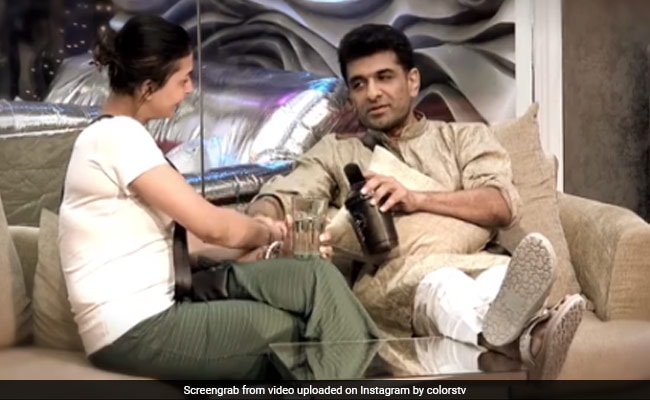 In tonight's episode of the popular reality TV show Bigg Boss 14, Pavitra Punia and Eijaz Khan became the centre of attention. Both the actors, who sort of became friends a few days ago, have grown apart. Pavitra, in tonight's episode told her fellow contestant Rubina Dilaik that she doesn't want to lose Eijaz as a friend but she cannot be into a one-sided relationship with him. She also complained that that he is being aloof, and added that her "extremely emotional" self cannot see herself with Eijaz if he cannot reciprocate her feelings. "Senior" Hina Khan added that Pavitra is "possessive" about Eijaz Khan. Coming to the other inmates, all the contestants woke up to the tunes of the song Gulabo from the film Shaandaar.

In another segment of the show, Bigg Boss announced an immunity task called "Farm Land," as a part of which all the contestants were divided into two teams. Team A counted Pavitra Punia, Eijaz Khan, Nishant Malkhani and Rahul Vaidya among its members, while Team B comprised Rubina Dilaik, Abhinav Shukla, Jasmin Bhasin and Shehzad Deol. Nikki Tamboli, who is this season's first "confirmed" contestant, was the 'Sanchalak'(moderator) of the task.

During the task, all the contestants had to play the role of farmers, while the seniors posed as shopkeepers, providing farming material to the competing teams. Both the teams had to convince the seniors to give them raw materials and the team which managed to get the maximum area of the garden transformed into their farm, would win the task. During the task, Jasmin Bhasin accused Nikki Tamboli of being biased and inefficient as a moderator.

Bigg Boss halted the game for a while and reminded all the contestants that the task is about decorating their farms and covering the maximum area. He schooled the contestants about the rules and asked them to play the game efficiently.