Bigg Boss 14: Pavitra Punia and Rahul Vaidya backed out from the captaincy task 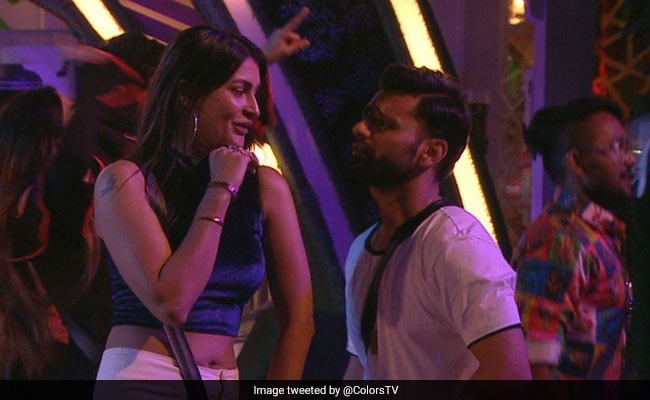 Bigg Boss 14: Pavitra and Rahul in the show. (courtesy

Just a day after Pavitra Punia sacrificed 10 of her clothes in order to save Rahul Vaidya from this week's nominations, the duo got into an ugly fight in tonight's episode of Bigg Boss 14. The contestants were given a captaincy task on Wednesday, where DJ Chetas, singers Anu Malik, Neeti Mohan and Shaan entered the house one by one and entertained the contestants and the last man standing on the dance floor was to become this week's captain. Coming back to Pavitra and Rahul's fight, here's what happened - Pavitra was seen fighting with Rahul over not supporting her in the task. "Mere saath khade ho sakte the, bol sakte the, 'Nahi, mereko Pavitra chahiye captaincy ke liye," an angry Pavitra told him, to which he Rahul replied that everyone wants captaincy. When she asked if he will support her, he said, "Mere support karne se kuch hoga nahi (my support will not make a difference)."

In the second session of the captaincy task, Rahul Vaidya decided to quit the game after Shardul, Pavitra and Nikki decided not to leave the dance floor. After much ado, Pavitra and Shardul decided to deliberately break the rules and were out of the game. At the end of the game, only Jasmin Bhasin and Aly Goni were the only ones on the dance floor. Composer Sachin Sanghvi was the guest for the final leg of the task. Jasmin broke the rule by sitting on the floor, which is why Aly became the captain of this week, as a part of which, he will be given special privileges.

It is a Non-Stop Dance Night in the #BB14 house. Stay tuned to #Colors for unlimited fun.#BiggBoss2020#BiggBoss14@BeingSalmanKhanpic.twitter.com/HnRas508Lj

At one point of time, all the contestants forgot about the task and started dancing to the tunes of Sachin Sanghvi. He even dedicated the song Milgei Milegi to Jaan Kumar Sanu. After the task, Bigg Boss thanked all the singers.

In another segment of the show, Nikki Tamboli broke the rules of the house by taking a nap during the day. Aly, who is this week's captain, politely asked her to get up. However, Nikki refused to get up, after which, Aly splashed some water over her face, which had no effect on her. The duo later got into a war of words.