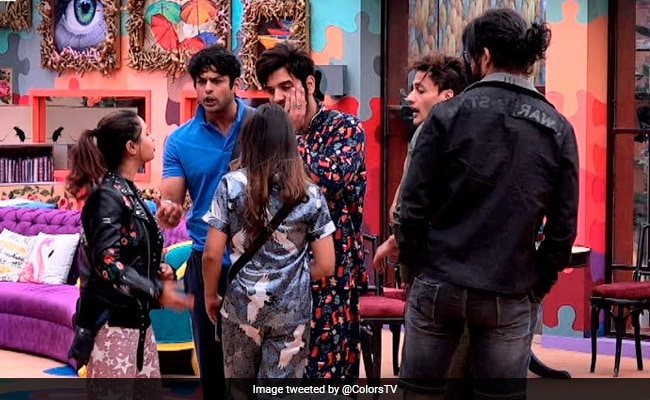 The 66th day in the Bigg Boss 13 began with some chai pe charcha - a rather heated one - when captain of the house Sidharth Shukla refused to hand over milk cartons to Rashami Desai, which led to a fight. Rashami and Sidharth, who don't really see eye-to-eye on matters in the house, accused each other of "stealing". Rashami was taken away by her friends while she yelled at Sidharth with these words: "illogical talk, illogical decisions, illogical captain." The entire chai session got cancelled as nobody got to have tea. Later in the day, Rashami was spotted planning with Asim Riaz if they could come up with a plan to boycott the captain. Meanwhile, Asim Riaz was also spotted flirting with Himanshi Khurana by saying how "cute" she looks at the time.

Next it was time for lunch when some of the contestants claimed they had not eaten lunch and parathas were over already. Asim took the issue to captain Sidharth Shukla and told him that he should have managed the rationing of the house better. Sidharth yelled at Asim saying his teammates "steal" stuff, hinting at Rashami.

However, soon it was time for the nominations when Bigg Boss introduced a twist. House captain Sidharth was given the special power to nominate contestants of his choice with proper reasoning, who were to stay in the empty swimming pool till Bigg Boss said otherwise.

Between Asim and Mahira, Sidharth nominated Asim because he is "strong". And once Asim was in the pool, Sidharth told him off by saying: "What goes around comes around." After Asim was nominated for elimination, Rashami accused Sidharth of extreme "favouritism." Next up were Shefali, Vikas and Himanshi, Sidharth saved Vikas citing his bonding with him and nominated the other two. While nominating contestants, Sidharth Shukla mostly cited non-participation in household tasks as his reasoning.

Rashami and Vishal were called next when Sidharth nominated Rashami in a jiffy. Sidharth, who has been fighting with Rashami through the season, sarcastically asks: "Reason batane ki zaroorat hai (Do I need to say why)?" and then added: "She has a problem with everything" and accused her of using foul language. Between Aarti and Paras, Sidharth nominated Paras Chhabra, who was rather taken aback but appeared to be calm and composed.