Bigg Boss 12: 'Told Jasleen's Father We Will Both Do Kanyadaan At Her Wedding,' Says Anup Jalota

"I don't have any romantic feelings for her. Our relation is more of a guru-shishya," Anup Jalota said 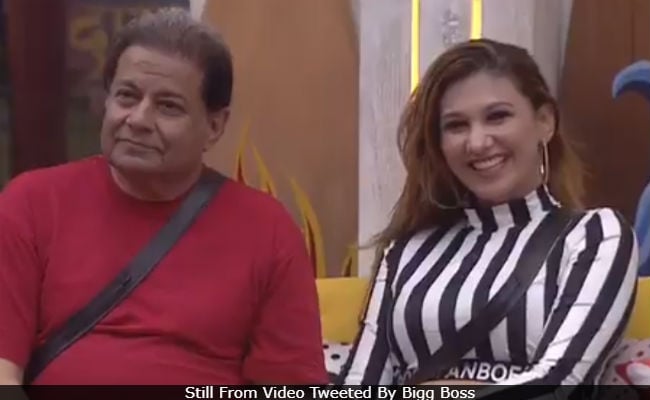 Bigg Boss 12 contestant Anup Jalota, who got evicted over the weekend, shocked everyone with his statement on his rumoured relationship with Jasleen Matharu, also his student. Contrary to the reports, Anup Jalota said that "there is no girlfriend-boyfriend kind of a relationship between them," and on Tuesday, the 65-year-old singer, along with Jasleen's father Kesar Matharu, interacted with the press and added that he is "good friends with Kesar Matharu" and has also told him to "invite him to Jasleen's wedding and they both will do her kanyadaan together," news agency IANS reports. Anup Jalota had made headlines for his controversial entry with Jasleen Matharu, 28, in Bigg Boss 12, hosted by Salman Khan.

Anup Jalota and Jasleen Matharu had sort of confirmed that they are dating, minutes before they entered Bigg Boss' house.

Anup Jalota told IANS that he has cleared the matter with Jasleen's father and told him, "When Jalseen will be out from Bigg Boss house, then only we will know the truth behind her decision."

"Now I have told Kesar Matharu to invite me to her wedding and we both will do kanyadaan of Jasleen together. I don't have any romantic feelings for her. Our relation is more of a guru-shishya and I don't see any romantic relationship between us in future as well," he added.

Of his journey to the show with Jasleen, Anup Jalota told IANS, "Jasleen took training of singing from me for quite some time. One day, Jasleen came to me and said Bigg Boss had approached her to be on the show. I said it is great news and didn't deny or accept the offer. She said this season's theme is vichitra-jodi and I want to be on the show as part of a jodi."

"I said you're a known face in the music industry and you can take anyone. Then Jasleen said, 'you're my guru, we shall enter as 'guru-shishya Jodi. I agreed. We sat and discussed with her father, Kesar, who happens to be my dear friend."

On the show, their relationship was the primary topic of discussion. In one of the episodes, Bigg Boss had also arranged for a special date night for them.

"Bigg Boss makers kept Jasleen in a secret place a week before the start of the show and I am completely unaware of how this guru- shishya jodi turned into a love Jodi," Anup Jalota told IANS, adding that he was a bit "shocked" to see their introduction on the show. "Then I decided we will act as a couple till we are in the Bigg Boss house," he said.

Meanwhile, On Tuesday's episode, when Bigg Boss 11 winner Shilpa Shinde entered the show, she told Jasleen that Anup Jalota has said that "it's only a musical relationship between them."

Jalseen was later seen talking to housemates about how she is "disturbed by what Anup Jalota has said outside" and is shocked that he has "dismissed their relationship."