Teejay Sidhu tweeted: "I know this is a very hard time for him, he must be feeling so hurt" 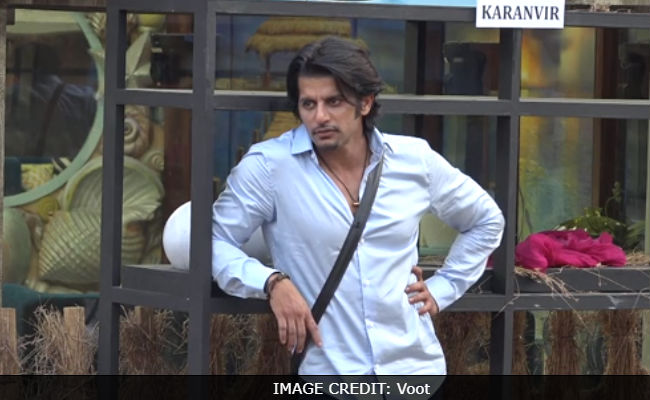 Karanvir Bohra broke down after being abandoned by his teammates in the ongoing captaincy task in Wednesday night's episode of Bigg Boss 12 and his wife Teejay Sidhu along with the actor's fans think that this may trigger Karanvir to play the game for himself. Interacting with a fan of the Naagin actor, Teejay Sidhu tweeted: "I know this is a very hard time for him, he must be feeling so hurt but sometimes we have to break to become stronger." In last night's episode, Karanvir stood all by himself fighting the opponents during a task when co-contestant Surbhi Rana and Deepak Thakur teased him for being dumped by his 'so-called friends.' After they were ousted from the game, Sreesanth and Dipika Kakar left the activity area and went about their usual chores instead of helping Karanvir.

Karanvir was in tears after hearing the taunts and eventually Somi Ali came over to hug Karanvir and console him. Fans think that Karanvir should focus on highlighting himself without letting others take advantage of him. "However, it was time for Karanvir Bohra to become strong and start playing on his own," Teejay wrote in a separate tweet.

Yes, I agree with you, these kinds of things do happen in @BiggBoss. However, it was time for #KVB to become strong and start playing on his own. #BB12#BiggBoss12@ColorsTV@endemolshineind#KaranvirBohra#TeamKVB#KvbArmy#HeroKVB@KVBohra#kvbohrahttps://t.co/hVz56L8VCn

Eventually, Karanvir lost the task but the actor was praised for his determination by the opposing team. Teejay said: "Sometimes you have to lose the battle to win the war!"

Sometimes you have to lose the battle to win the war! @KVBohra#KaranvirBohra#KVBohra#KVBarmy#HeroKVB#TeamKVB#BiggBoss12#BB12@ColorsTV@EndemolShineIND@justvoothttps://t.co/t0daxQqYEq

As of now, Bigg Boss have broken all jodis and every player is now playing independently. For the upcoming week, singer Anup Jalota, actress Srishty Rode, Surbhi Rana and Saba Khan have been nominated for eviction.