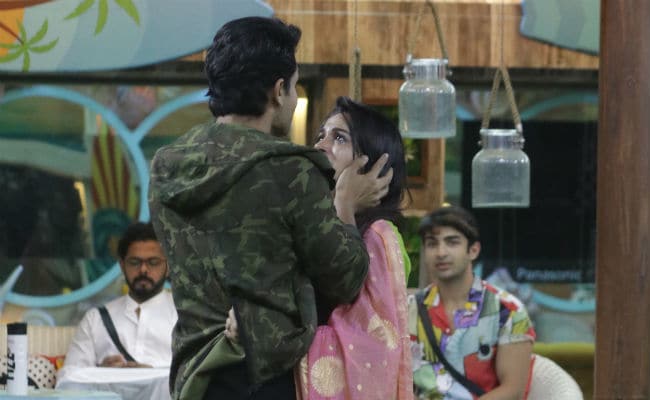 Shoaib Ibrahim and Dipika Kakar in a still from Bigg Boss 12.

Tonight's episode of Bigg Boss 12 can be described as a roller coaster ride of emotions. On the second day of this week's luxury budget task titled 'Remote Control,' all the contestants broke down. As a part of the task, the family members of the housemates visited the house and gave their loved ones some advice. Television actress Dipika Kakar was represented by her husband Shoaib Ibrahim, who not only gave Dipika some much needed advice but also thanked Dipika's friend S Sreesanth for standing by his wife through thick and thin. During the session, Shoaib addressed Sreesanth as "Saale Sahab." Needless to say, Dipika got extremely emotional on seeing his husband and she immediately broke down. Shoaib's entry in the house was extremely dramatic. He especially narrated a poem in Urdu for Dipika, which brought a smile on the faces of all the housemates.

As part of the Remote Control task, Romil Choudhary's wife and his son entered the house to meet him. Romil too got teary-eyed on seeing his family members and he introduced Somi Khan to his wife as his best friend. Interestingly, Romil's wife was quick to correct Romil and said that Somi is like his younger sister to him. That's not it! Somi, too had a visitor, who was none other than her sister and former Bigg Boss 12contestant Saba Khan. Saba advised her sister to stay strong and told Somi that she believes in her. She also advised her to not get influenced by others.

It will be interesting to see if all the housemates will adhere to the advice given to them by their loved ones or if they will play the game by their own terms.