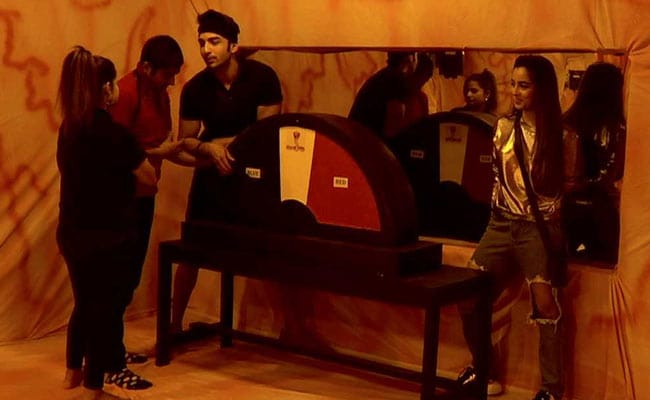 Rohit Suchanti with other contestants during the luxury budget task

The Day 65 of Bigg Boss 12 was as always, full of twists, turns and fights. The housemates woke up to the song Naagin Dance Nachna, which gave an insight of what is in store for the contestants today. Bigg Boss called the housemates to the living area and announced the next luxury budget task. The new luxury budget task titled "Saanp" will also have an impact on captaincy. Contestants were divided into two teams - red team consisting of Karanvir, Romil, Somi, Deepak and Surbhi while blue team had Rohit, Dipika, Sreesanth, Megha and Jasleen. Srishty Rode was the sanchalak of this task.

A make-belief snake was set in the garden area and every time it hissed, a contestant from each team had to fed to the snake. In the end, the team whose maximum members will be remaining from outside the belly of the snake would win the task.

Megha entered the snake's belly after the first buzzer went off following which she switched the lever to red. Following this, Deepak from the red team entered the snake's belly and this time he used his full strength and changed the colour to blue. Blue team wanted to send Jasleen instead of Rohit since they were not very confident on him. Their worst fears come true when Rohit enters the snake and joins hand with the red team and backstabs blue team. This upsets Dipika, Sreesanth, Megha and the other team members.

The twist in the tale will surely impact the results of the luxury budget task. Bigg Boss will announce the winner of the task in the next episode following which the winners will compete for the captaincy task.