For the task, Srishty and Saba (representing her jodi) will have to collect magnetic plates from the other housemates by convincing them 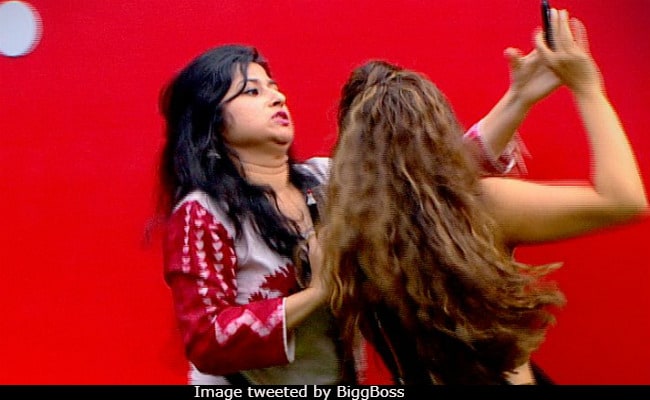 Thursday's episode of Bigg Boss 12 began with Surbhi, Saba and Deepak discussing Sreesanth's eviction. All three say they were shocked when Dipika took Sreesanth's name. He himself was shocked to hear that as he admitted in the secret room: "Even I was shocked!" In another room, Dipika and Karanvir discuss the elimination process. Dipika said Sreesanth told her he really wanted to leave the house. Even Srishty told Sourabh that Sreesanth was too emotional for the show. Meanwhile, Surbhi thought Nehha and Dipika are pretending to be sad when they are actually pleased with Sreesanth's eviction.

Hearing all this, Sreesanth told Anup Jalota in the secret room that he really wants to win the show now. Meanwhile, the housemates woke with up a gloomy mood the next morning as they are upset with Sreesanth's exit. Dipika continued to cry saying she nominated Sreesanth as he was really missing home. Dipika also added that she hoped nobody else would vote for Sreesanth but now that he's actually out of the house (that's what the housemates think), she feels really guilty of having him eliminated from the show. Hearing all of this, Sreesanth vowed again to win the show once back in the house!

The captaincy task commenced around mid-day, which was managed by Dipika. For the task, Srishty and Saba (representing her jodi) will have to collect magnetic plates from the other housemates by convincing them. After collecting the plates, they'll be asked to place them on a board which will be placed in the garden area. Srishty and Saba will then have to write their names on their respective plates and the new captain will be decided based on whoever has maximum plates with their names. Srishty and Saba will also be allowed to strike off their opponent's name and write their own name on the plates. Dipika Kakar will oversee the task.

As the task began, Srishty and Saba tried to and convince the housmeates to give them the magnetic plates while Karanvir planned with Srishty about when she should start sticking the magnetic plates. He also tried to convince others on Srishti's behalf. Saba occupied most part of the board and blocked Srishty, who then tried to take Saba's plates, and things heated up from now onwards. As Saba pushed Srishty, the atmosphere in the garden area got tense with Dipika warning both of them. But Saba pushed Srishty really hard, who then punched Saba in the face. As Dipika tried to stop Srishty, she locked herself up in the washroom, breaking things and yelling that she wants to go home. Saba continued with the task when Dipika reiterated that Saba's behaviour was uncalled for. While the housemates tried to pacify Srishty, Bigg Boss stopped the task.

Bigg Boss, upon hearing Dipika's account of what happened, cancelled the task and banned Srishty and Saba from becoming captains for their entire stay. Meanwhile, Romil and Surbhi are reinstated as captains for the upcoming week. Bigg Boss also gives out a stern warning against physical violence in the house.