Sreesanth declared he wanted to leave the house, again 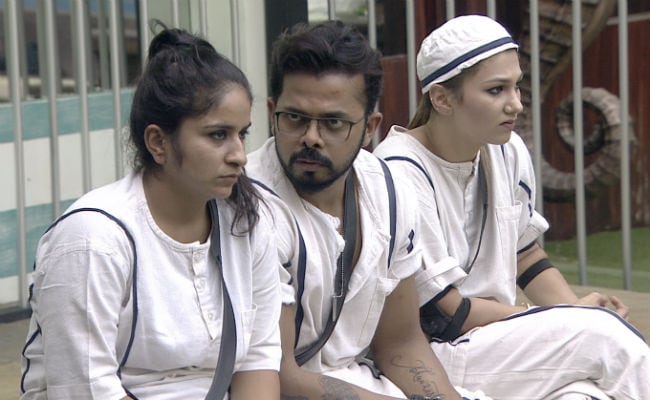 Sreesanth in a still from the show

Sreesanth, who is by now known as the one contestant, who whines to leave the house after anything and everything, did something similar on Monday's episode. Romil appeared to borrow Sreesanth's ball to play cricket with the other housemates and just when the contestants began to enjoy the match, Bigg Boss called him to the confession room and pulled him up for not doing the duties of a captain properly. He was also asked to secure the bat and the ball and keep it out of everyone's reach. When Romil asked for the ball, Sreesanth got hold of it and tore it into bits, grumbling all the while that it's because of the other housemates, and also Romil, that he had to get rid of the ball.

"Why did you take the call from the cupboard?" he fired at Romil, after which he declared that he wanted to leave the house immediately. A fuming Sreesanth then locked himself up in the washroom. In an attempt to pacify Sreesanth, the housemates asked him to come out of the washroom but he said he "just cannot face the cameras." Throwing away his mic, Sreesanth also declared: "I will only speak in English" - something which is banned in the house.

In another news, Sreesanth, Nehha Pendse and Karanvir Vohra found themselves nominated for this week by none other than Bigg Boss himself. The trio were nominated as they tried to make their own rules in a previous task.

The contestants also participated in the luxury budget task in Monday's episode of Bigg Boss - something which will also decide on the next captaincy. Sreesanth, Nehha, Jasleen, Deepak, Surbhi, Sorabh and Somi were pitched against Karanvir, Dipika, Srishti, Saba, Shivashish, Romil and Urvashi. The former team were to dress as prisoners and jump across a wall in the garden area while the latter, dressed as policemen, were to stop them. The last one to jump in each round, was to be eliminated. The task which started on a competitive note will continue with Tuesday's episode.