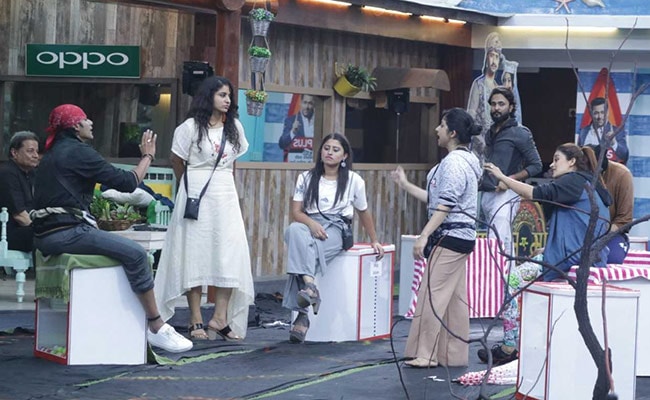 Bigg Boss contestants in the midst of a discussion

On the eighteenth day, the contestants continued with the season's second luxury budget task titled Jwalamukhi. In the battle between the singles and jodis, each contestants ensured that they collect the maximum number of balls from the volcanic eruption. After Sreesanth, Dipika Kakar, Srishty Rode, Jasleen Matharu were eliminated from the task, the fight for collecting the maximum balls continued between Neha, Sourabh, Karanvir, Saba and Romil. The episode begins with the housemates discussing about Neha Pendse's behaviour in the task. The contestants are seen discussing about Neha speaking foul words to Somi. Neha offers her balls to Saba and tells her that she will support her during captain selection, but Saba refuses. Deepak also gives his balls to Karanvir.

It appears that Anup Jalota is not yet over the fact that Jasleen chose her make-up and clothes over saving him in a previous task. After crying foul that he wants to continue the game without his jodidaar Jasleen Matharu, the duo later solve their differences. But Anup Jalota warned Jasleen and said that the incident was just a warning and he wants her to give him more importance.

Coming to theJwalamukhi task, Sourabh and Shivashish, Saba and Somi, Romil and Surbhi win the luxury buidget task and are nominated for captanicy.

There's a lot of fight happening in the Bigg Boss house at the juncture. Surbhi, Somi and Saba get into heated discussion. Deepak and Jasleen also get involved in a fight after she unintentionally touched him with a broom.

Bigg Boss announces the captaincy task and Surbhi, Shivashish and Somi are competing for it. The trio need to sit together and hold a captain ring. The contestant who stays the longest with the ring will be declared as the winner.