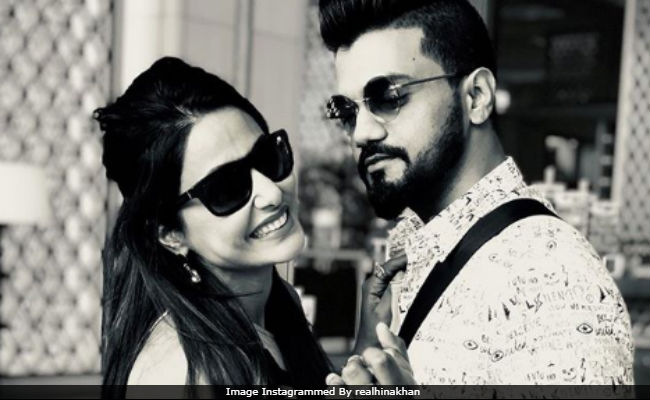 New Delhi: Television actress Hina Khan, the first runner-up of Bigg Boss 11, is currently on a vacation in Colombo, Sri Lanka. She is accompanied by boyfriend Rocky Jaiswal, who also celebrated his birthday there. The duo have posted several pictures from their Colombo diaries on Instagram. "Love," wrote Hina, adding a picture of herself with Rocky. Hina Khan had planned the trip well in advance. During an interactive live session on Twitter, she said, "Rocky had a difficult time dealing with everything alone. Now that it's his birthday next month (February 14), we are planning to go out for an international trip."

And this is how the day ended.. #Ministryofcrabs #dinner #love #happiness #gratitude #peace happy birthday @rockyj1 and happy Valentine's Day RO... I love u

When places become memories you just don't visit them you re-live the precious past and Value the present even more. This has been our Touchwood-Spot for almost every time we've traveled together n apart. Love it but lesser than I love my travel partner @realhinakhan #peacocklove

Before Bigg Boss 11, Hina was rumoured to be dating Rocky, the supervising producer of her previous show Yeh Rishta Kya Kehlata Hai. However, their relationship was out in public after Rocky proposed to Hina on Bigg Boss 11. He accompanied Hina to the Bigg Boss 11 launch, along with her parents and also visited her twice during the stay. On asking about her wedding plans, Hina had told IANS, "Not at all. We have a long way to go. We just want to enjoy ourselves, but I am glad that it's finally out in public."

Before flying to Colombo with Rocky, Hina went to Goa for a brief family-only vacation. See the picture here.

What a memorable trip this was.. dedicated to my super cute maasi... we love u #familytime #goa #getwellsoonmaasi #rejuvenation @meerareeba @manaanmeer @sai_rab_ @ikhanaamir Thank you guys for making it possible

Hina Khan had lost the Bigg Boss 11 trophy to actress Shilpa Shinde. Of her Bigg Boss 11 journey, she told IANS, "I don't regret anything. There are many things that we said but then we also took care of it while in the house with the same people. Even if we did say anything to each other, we said sorry to each other the next morning. I don't think any contestant in the house has any regrets about anything."

Promoted
Listen to the latest songs, only on JioSaavn.com
Hina Khan is best-known for featuring as Akshara in Yeh Rishta Kya Kehlata Hai. She quit the show in 2016. Before Bigg Boss 11, she was seen in the reality show Khatron Ke Khiladi 8.