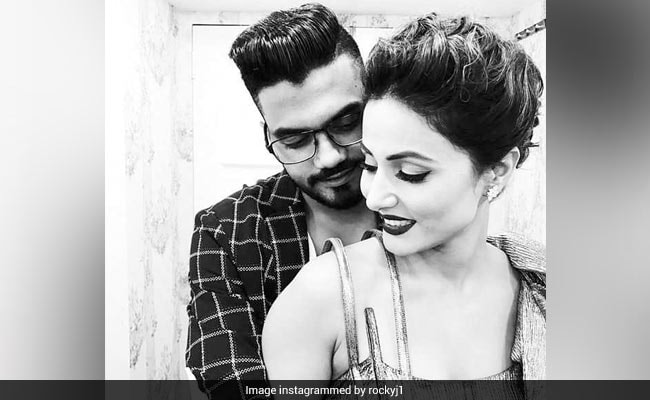 New Delhi: Bigg Boss 11 contestant Hina Khan interacted with her fans through a Twitter live chat on Tuesday. Hina, who became the first runner-up of TV reality show Bigg Boss 11, spoke about her Bigg Boss journey, her friends contestants Priyank Sharma and Luv Tyagi and boyfriend Rocky Jaiswal while she ignored questions related to winner Shilpa Shinde. Hina shared that her friendship with Luv and Priyank is strong outside the house too. "Luv has gone underground. Priyank and I are in touch with each other." Hina called herself "Sherkhan" in the house. Of this she said, "My fans have given me this title and I'm overwhelmed.

Hina also spoke about Vikas Gupta (Bigg Boss 11's second runner-up). She said, "We are both similar individuals and I had even told him in the house that we might become great friends after the show. He has been constantly calling me and finally, I am meeting him and Priyank today."

Hina Khan's soft toy pooh, which was destroyed during a task, is back with her again. "I requested Bigg Boss' team to return my pooh. Rocky got it dry cleaned and yes, it's back with me again," Hina Khan said during the live chat.

Hina also spoke about her boyfriend Rocky Jaiswal, who visited her when she was in the Bigg Boss house. Hina said, "He had a difficult time dealing with everything alone. Now that it's his birthday next month on February 14, we are planning to go out for an international trip." Hina also shared that since Rocky loves to dance and she wouldn't mind taking up the next season of Nach Baliye for him.

And this is the bestest and a very special one #lovelovelove@JJROCKXXpic.twitter.com/QBStNA6uTg

One more for u pic.twitter.com/t6RfnXVsIk

And jab we finally met.. @ipriyanksharmaa@lostboy54@JJROCKXXpic.twitter.com/6hXvcN4qZk

Promoted
Listen to the latest songs, only on JioSaavn.com
Hina Khan had innumerous fights in the house with contestants like Arshi Khan, Shilpa Shinde, Akash Dadlani and Puneesh Sharma. Hina made headlines when she made offensive comments on South Indian actresses and was slammed on social media.