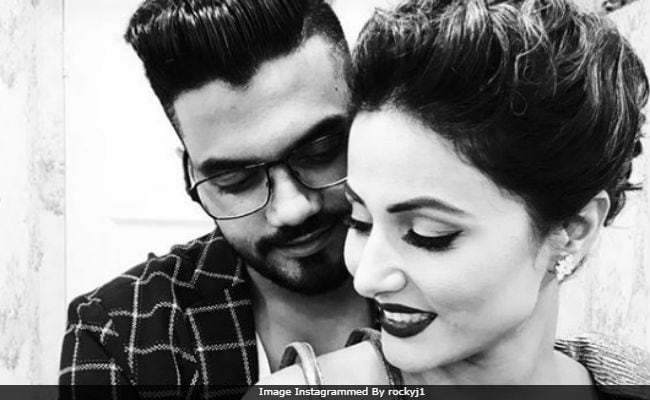 New Delhi: Hina Khan, the first runner-up of Bigg Boss 11, is 'glad' that her relationship with boyfriend Rocky Jaiswal is out in public, news agency IANS reports. Hina was rumoured to be dating Rocky for quite some time. He accompanied Hina to the Bigg Boss 11 launch and also visited her twice during the stay. On asking about her wedding plans, Hina told IANS, "Not at all. We have a long way to go. We just want to enjoy ourselves, but I am glad that it's finally out in public." Rocky, who is the supervising producer of Hina's show Yeh Rishta Kya Kehlata Hai, had proposed to Hina on Bigg Boss 11.

During her stay in the Bigg Boss 11 house, Hina was criticised several times for her comments and for being 'over dramatic.' Hina was also told that she behaves like a 'Mohalle Wali Aunty' sometimes.

Hina lost to Shilpa Shinde, who won Rs 44 lakh as prize money and a trophy. "I don't regret anything. There are many things that we said but then we also took care of it while in the house with the same people. Even if we did say anything to each other, we said sorry to each other the next morning. I don't think any contestant in the house has any regrets about anything," Hina told IANS.

She also revealed that the Bigg Boss 11 contestants are planning a trip soon and said, "I like to tell everyone that we are going on a trip, all of us, but we won't be disclosing the destination. I had decided some time ago that we have fought a lot in the house, we have said things to each other, but when we leave the house we will forget about all of that and go on a trip."

Promoted
Listen to the latest songs, only on JioSaavn.com
Hina Khan became a household name after featuring as Akshara in Yeh Rishta Kya Kehlata Hai. She quit the show in 2016. Before featuring in Bigg Boss 11, she participated in the reality show Khatron Ke Khiladi 8.