Bigg Boss 11: Hina Khan was declared the first runner-up of the show 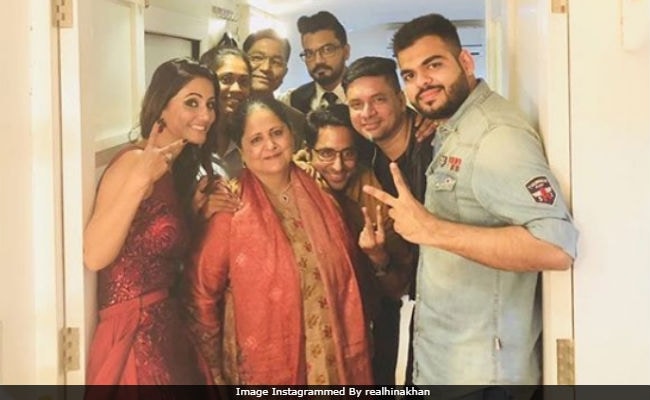 New Delhi: Television actress Hina Khan, also the first runner-up of reality show Bigg Boss 11, shared a picture of herself with family, boyfriend Rocky Jaiswal and her team, soon after the finale. "Hina Khan has won the hearts of millions with the way she played inside the BB house. Here's the first picture of Hina with her family & team Hina post the grand finale of BB. #SherrKhan," reads the caption. In the picture, Hina, dressed in a wine-coloured gown, poses with a victory sign. The Bigg Boss 11 grand finale was held last night and actress Shilpa Shinde was declared the winner by host Salman Khan. Shilpa took home Rs 44 lakh as prize money and the winning trophy.

Hina Khan has won the hearts of millions with the way she played inside the BB house. Here's the first picture of Hina with her family & team Hina post the grand finale of BB! #SherrKhan #TeamHinaKhan

Hina, Shilpa, Vikas Gupta and Puneesh Sharma were the four finalists competing for the finale. Puneesh got eliminated first and Vikas was the second finalist to leave the house. The final competition was between Hina and Shilpa.

Ex-contestants like Bandgi Kalra, Akash Dadlani, Dhinchak Pooja, Hiten Tejwani, Arshi Khan and others also attended the grand finale, along with the families of the four finalists.

.@BeingSalmanKhan has a fun activity planned with @akshaykumar. Keep watching the #BB11Finale to catch all the masti. pic.twitter.com/j8WaYbpaAX

Promoted
Listen to the latest songs, only on JioSaavn.com
Hina Khan, Shilpa and Vikas had entered Bigg Boss 11 in the celebrity group. During her stay in the house, she was criticised several times for being 'manipulative,' 'dramatic' and 'outspoken.' A couple of weeks ago, during an interactive session with the press, Hina was told that she behaves like a 'Mohalle Ki Aunty' while previously, she was criticised for her 'overdramatic' sacrifice of Pooh (her soft toy).