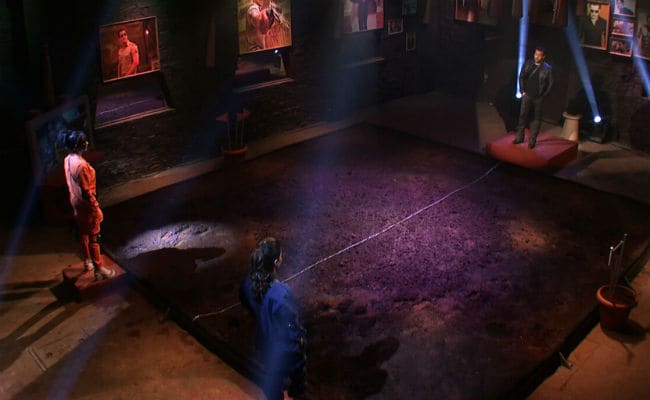 Hina Khan and Arshi Khan were called in the Sultani Akhada

New Delhi: Salman Khan, like always, made a Dabangg entry for the Weekend Ka Vaar episode of Bigg Boss 11. He began by taking names of contestants who remind him of different festivals. Arshi Khan reminds him of Naag Panchami, Hina Khan - Dahi Handi, Shilpa Shinde - Holi and Akash Dadlani of Easter. Meanwhile, inside the house, Bigg Boss gave the contestants a task to rank each other from 1 to 10 on the basis of entertainment, popularity and their contribution inside the house, with consensus. Shilpa gets the first spot while Hina is given the second. Vikas Gupta, Jyoti Kumari, Luv Tyagi and Mehjabeen Siddiqui weren't included in the list.

The housemates stand in the ranking they've previously decided. What do you think will happen next? #BB11#WeekendKaVaarpic.twitter.com/5mnJestOJj

Salman then started the interaction with the contestants and reprimanded Akash for wasting food in the luxury budget task despite repeated warnings while he praised Hiten Tejwani and called him someone who is absolutely 'balanced' in the house. Salman also made some changes on the ranking list and Sabyasachi Satpathy and Benafsha Soonawalla's spot were given to Vikas and Jyoti respectively.

On asking who deserves to get voted out this week, with majority votes from the housemates, contestant Luv Tyagi was nominated to sit on the bull. Luv admitted to being a bit 'directionless' inside the house.

.@BeingSalmanKhan asks the housemates to name one person they think performs the least in the house and they name Luv Tyagi. #BB11pic.twitter.com/KZOscX86Ve

Salman then called Hina and Arshi to the Sultani Akhada where they vent out all their anger towards each other. Arshi defended herself and blamed Hina for all the fights. After two rounds, Salman cancelled the Sultani Akhada task as both Arshi and Hina did not fight in the spirit of the game.

.@eyehinakhan hits #ArshiKhan as they both continue to fight! Did you see that coming? #WeekendKaVaarpic.twitter.com/aHZEcW5Tmk