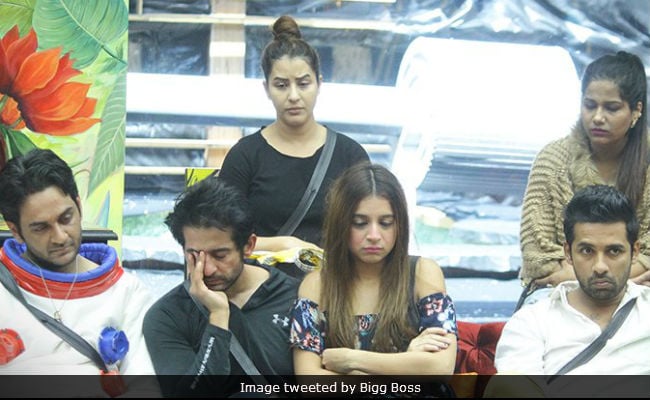 Bigg Boss gave 'Mission Bigg Boss 11' task, which is a combined task for luxury budget, captaincy and also to keep the winning money intact. In the task, the gharwale had to be seated in an artificial space craft built in the garden area till instructed. A siren would go off at regular intervals and contestants could choose to leave the rocket if they want. But, as always, there was twist. Before the task began, envelops with each with contestants' names were kept on a table in the garden area.

Each envelope had an amount assigned to the concerned contestant. The contestant, who disembarked the rocket had to open his envelope to find out how much is actually being deducted from the total prize money of Rs. 50,000 lakhs. Puneesh Sharma, the captain of the house, was in charge of 'Mission Bigg Boss 11.'

Sabhyasachi Sathpathy was the first to leave the rocket and hence Rs. 70,000 got deducted from the prize money.

The housemates get another chance at immunity. Witness all the drama on #BB11 at 10.30pm!https://t.co/sWfllia2QXpic.twitter.com/WiLmdWttnm

Team Hina and Team Arshi Khan decided to insult each other even in the task. Later, Bandgi got down from the rocket with prize money of Rs. 1,75,000.

The two teams in the rocket get into an argument! Watch #BB11 to find out what they're saying! pic.twitter.com/1qCOZvyvj7

The sanchalak of the house, Puneesh was distracted by Bandgi and was seen getting intimate with her. Arshi was the next to get down with Rs. 3,10,000 while Shilpa Shinde's envelope had a big amount with Rs 8,00,000.

Puneesh left the garden area in the middle of the task to spend some quality time alone with Bandgi. Hina, Benafsha Soonawalla, who were still in the task, cheated and used the washroom by getting off the rocket. Vikas Gupta peed in a packet as he could not get off the rocket while Priyank, Sapna Choudhary and Luv managed to sneak their way to the washroom secretly without Puneesh's knowledge.

Bigg Boss declared that the gharwale failed in the task because Puneesh went to sleep during the task and the contestants got down and cheated. Adding to this, he revealed that the prize money was zero.

Promoted
Listen to the latest songs, only on JioSaavn.com
Three contestants to compete for the captaincy were Sabhyasachi, Bandgi and Akash. Hina Khan broke into tears blamed herself for losing the task.

Who should be blamed for this Puneesh or Hina? Tell us in the comment section below.