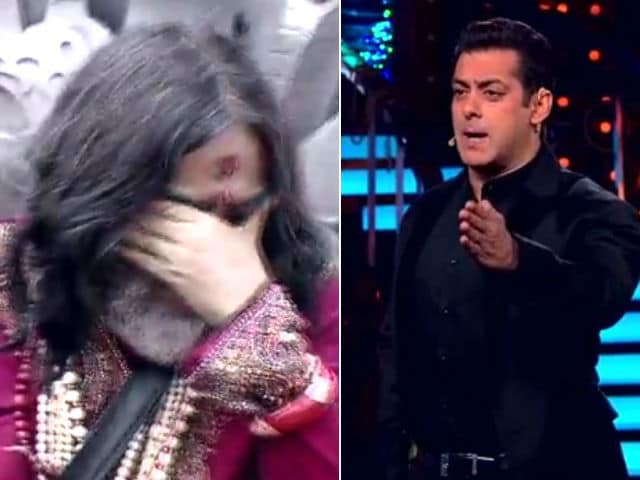 New Delhi: The Weekend Ka Vaar episode is here on Bigg Boss 10, which means the khalnayak of the week will confront weekend show host Salman Khan, who will point out the contestant's mistakes and misbehavior. This week contestants are divided between Swami Om and Manveer Gurjar. Swami Om made headlines for his sleazy remarks towards Monalisa and Nitibha Kaul while Manveer Gurjar has been accused of being selfish by saving himself during the nomination sequence. And Swami Om (quite rightly) finds himself face to face with Salman, who rebukes his misogynistic comments.

Salman Khan, who is currently hosting the controversial reality show for the sixth time, reprimanded Swami Om saying that he has no right to give moralistic stance on any woman participating in the show. Swami Om had infamously slut-shamed Monalisa and questioned her relationship with fellow contestant Manu Punjabi, even though she's engaged. His remarks were opposed by Rohan Mehra, Lopamudra Raut and Rahul Dev.

Swami Om did not stop there and he next targeted Nitibha Kaul saying she wore "short clothes to look attractive." He pointed this out to actor Gaurav Chopra, who first defended her saying she wears kurtas too and later shut him up saying he doesn't have a right to comment on anyone's choice of clothes.

In tonight's episode Salman asks Swami Om, 'Who gives him the right to judge women' based on their choice of clothes or who they speak to or not. "Women are not at fault here. If you think like this then you will pollute the society," Salman said (in Hindi). "If you say things like this about someone's daughter then you will get beaten up. I was shocked," he added, while the housemates applauded. But the drama doesn't end here, Swami Om in a ditch attempt to defend himself, said, "Look at how they've abused me. They've only insulted me so far in the show. Have I come to the show for this reason?" And he breaks down.

.@BeingSalmanKhan has a lot to say to #OmSwami about his behavior in the @BiggBoss house! #BB10WeekendKaDoubleVaarhttps://t.co/RUIvJi3ON4

Promoted
Listen to the latest songs, only on JioSaavn.com
Meanwhile, television actress Mouni Roy will promote her upcoming television show Naagin 2 on Bigg Boss 10. One of the episode's highlights would definitely be Salman khan's naagin-dance with Mouni: