Bigg Boss 10 Grand Finale: Manveer Gurjar Is The Winner Of The Show 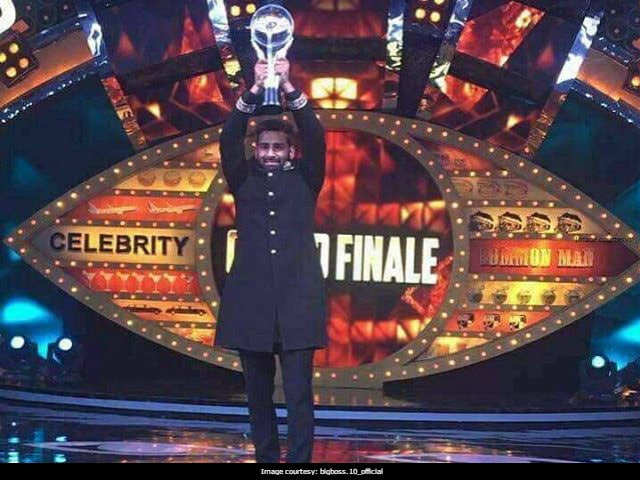 Bigg Boss 10 Grand Finale: Manveer Gurjar in a still from the show

New Delhi: Manveer Gurjar, who entered Bigg Boss 10 as part of Team Indiawale, the team comprising non-celeb contestants, is the winner of Bigg Boss 10. Manveer Gurjar, who won the top prize, left behind celeb contestants Lopamudra Raut and VJ Bani in the race to win the tenth season of the controversial reality show and took home the prize money of Rs 40 lakhs. Ahead of the bigg announcement, Salman Khan kicked off the grand finale of Bigg Boss with a blockbuster welcome, as he performed to the song Aaj Ki Party Mere Taraf Se from Bajrangi Bhaijaan. Here's a lowdown of what else happened in the grand finale of Bigg Boss 10.

Salman was joined by the ex-contestants of the show for a review of the finalists. Contestants like Rahul Dev, Nitibha Kaul, Rohan Mehra, Gaurav Chopra and Monalisa were in the audience to cheer for the finalists.

Salman announced instead of Rs 50 lakhs, the prize money has been reprised to Rs 40 lakhs. The finalists were given the choice to accept the extracted Rs 10 lakhs and leave the show ahead of the finale. Manu Punjabi became the first finalist to leave as he decided to take the money and make an exit. Later, Salman Khan announced that Manu Punjabi would have been the first contestant to be evicted according to public voting.

Soon, Kaabil stars Hrithik Roshan and Yami Gautam joined Salman for some masti-shasti in aid of their new film. Salman and Hrithik set the stage on fire as they matched steps with each other, dancing to Salman's Baby Ko Bass Pasand Hai and Hrithik's Ek Pal Ka Jeena. The stars also interacted with the finalists and wished them luck.

.@iHrithik & @yamigautam are here to test how #Kaabil our finalists are! #BB10GrandFinalepic.twitter.com/0eicHfwzuG

Bigg Boss 10 will be replaced by new reality show India's Rising Star over the weekends. The show will be judged by singers like Shankar Mahadevan, Diljit Dosanjh and Monali Thakur.

And the legend @shankar_live has managed to raise the wall with 96% votes! #IndiasRisingStar#BB10GrandFinalepic.twitter.com/KAMjHRnnhp

Bigg Boss 10 was also joined by little guests from the new children's reality show Chhote Miyan. Actors Sohail Khan and Neha Dhupia, who are judges of the show, escorted the little stars around the sets.

These little ones are here to tickle your funny bone! Don't miss! #BB10GrandFinalepic.twitter.com/EspnSgA3JB

The finalists of Bigg Boss 10 - Manveer, Manu and Bani, Lopamudra, also set the stage on fire with some dhaakad performances.

The 'Dhaakad' girls @lopa9999 & @Bani_j dance their way to #BB10GrandFinale by putting up a great performance! pic.twitter.com/j0WTuFgYef

Promoted
Listen to the latest songs, only on JioSaavn.com
Meanwhile, there were also performances by TV stars like Karishma Tanna, Mouni Roy and the actors of new show Dil Se Dil Tak.

Bigg Boss 10 also made history when this season became the first one to witness Salman Khan evict a contestant for the first time - Priyanka Jagga. Swami Om was also eliminated from the show in light of his constant indecent behaviour towards others. The tenth season of Bigg Boss debuted in 2016, with the first episode being aired on October 16.