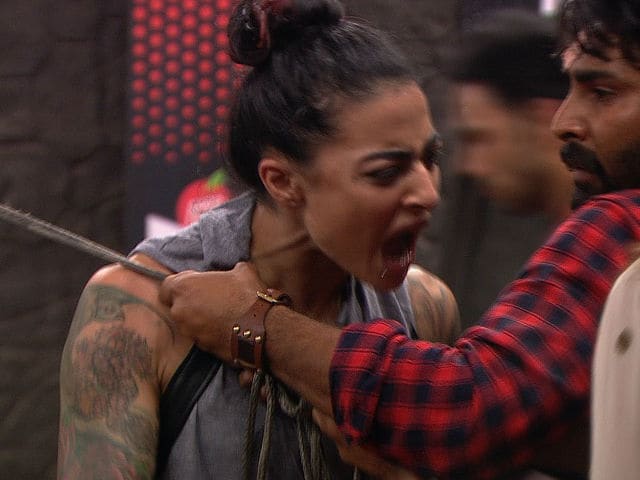 New Delhi: VJ Bani was extremely furious in the Bigg Boss 10 episode which aired on December 9. The VJ-turned-actress (she was last seen in Honey Singh's 2016 film Zorawar) shocked everyone when in a fit of rage (instigated by the one and only Swami Om) she kicked and threw things around the house. Even those who are close to Bani in the house, Gaurav Chopra, for instance, did not come near her while she stormed around the house abusing Swami Om and kicking around things. Swami Om during a task started off with his unpleasant comments and crossed the lien by dragging Bani's mother's name in the conversation.

Bigg Boss announced a new task to decide the upcoming captain of the house. It was Priyanka Jagga vs current captain Gaurav Chopra. They were both hung by a harness over a tub filled with water while their teammates held a rope suspending them in air. The first contestant in water (in other words the team which gave up first) lost the task. Priyanka won, but it wasn't easy for her.

Priyanka opted for Bani in her team along with Swami Om, Sahil Anand and Nitibha Kaul. Now, one would ask why Priyanka chose Bani considering they had an altercation some time back when Bani nominated Priyanka's name for the weakest link thereby nominating her for elimination. Also, Bani is close to Gaurav is a known fact. Bani let go off the rope the first and tried to convince Sahil Anand, fellow ex-Roadies contestant, to do the same so that Gaurav could win. She even motivated Gaurav's team - Lopamudra Raut, Mona Lisa, Rohan Mehra and Rahul Dev.

Irked by Bani's action, Swami Om, not so understandably, told Bani if she won't stop her mother would die. Totally shocking and Bani was extremely furious. She hurled abuses at Swami Om and replied how dare he utter such words and stormed off the task area. She banged on Bigg Boss' door demanding he let her out, but to no avail.

.@bani_j bangs the #BB10 door because she doesn't wish to stay in the house anymore! Do you think she is right? pic.twitter.com/RczKLouwlt

After the task was over, Swami Om went over and tried to apologise saying he was upset and the words escaped his mouth even before he realised what he was saying. But Bani was in no mood to forgive the self-styled godman, who rendered personal attacks on other contestants too on previous occasions. His earlier targets were Monalisa, Lopamudra Raut, Nitibha Kaul, Rahul Dev and Rohan Mehra.

On previous occasions, Bigg Boss and weekend show host Salman Khan had warned Swami Om to refrain from getting personal during a fight, but Swami Om being Swami Om, won't change. From Bigg Boss handle we also know that Salman Khan too loses his cool in the Saturday episode.

Promoted
Listen to the latest songs, only on JioSaavn.com
In the second part of the December 9 episode, the contestants interacted with the team of Wahaj Tum Ho. Actors Sana Khan, Sharman Joshi and Gurmeet Choudhary came up with a Brownie task for the contestants which lightened up the mood.