Bhool Bhulaiyaa 2: What Went Down For Kartik Aaryan On Day 1 Of Promotions 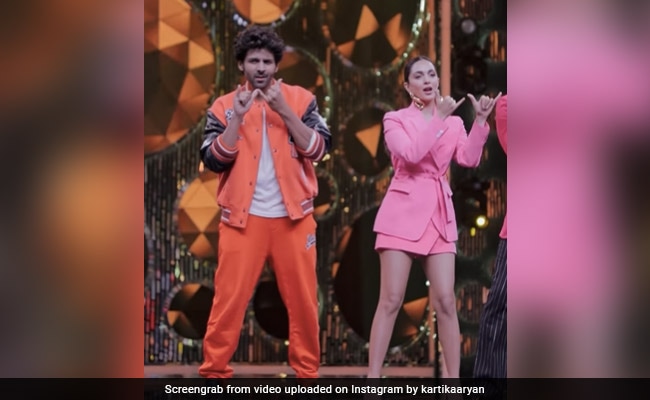 Kartik Aaryan and Kiara Advani in a still from the video.(courtesy: kartikaaryan)

Kartik Aaryan is back to dazzle us, this time with a horror-comedy. We are, of course, talking about the actor's new offering Bhool Bhulaiyaa2. The sequel to the superhit 2007 film has been making all the right noises thanks to the smashing first look posters of the lead cast. Now, the team has also begun to actively promote the film and Kartik Aaryan has offered fans a glimpse into the first day of promotions. In a video shared on Instagram, the actor is seen getting ready in his vanity van and proceeding to a reality show with co-star Kiara Advani by his side.

The video begins with Kartik Aaryan smiling at the person behind the camera and asking, “Video le raha hai? First day of the promotion. Bata toh de. Bhool Bhulaiyaa 2 (Are you taking a video? First day of promotion. Tell them, at least).”

Then Kartik Aaryan proceeds to choose his outfit for the appearance and steps into an orange varsity jacket, matching track pants and T-shirt.  Kartik Aaryan goes on to say that he is super excited about the day ahead. “I think it is going to be crazy, stupid, smart. We are going to have fun.” Both Kartik Aaryan and Kiara Advani are walking to the sets and we also get glimpses of them dancing on stage.  In the caption, Kartik Aaryan said, “Bhool Bhulaiyaa 2. Promotions Day 1.”

Before that Kartik Aaryan had shared another set of pictures from the first day of promotions and said, “Aur promotions ka hua shubh aarambh (And the promotions have begun).”

Over the weekend, a new poster of the film was also released on Kartik Aaryan's Instagram page. The poster has the actor in black robes that feature Indic script all over it, along with bandana and rudraksha chains wrapped around his neck and wrists.

Around the actor is a group of women who look frightening with their hair covering their faces. One woman, in the same garb as the others, is seen rising above Kartik, lending an eerie feel to the poster. Sharing the poster, he wrote, “Miliye Meri Saheliyon Se …Rooh Baba.” Sharing the release date, the actor added, “Bhool Bhulaiyaa 2 dekhne aayiye May 20, 2022 ko.”

Last week, Kiara Advani too shared her first look from the film. In the caption, she wrote, “ Meet Reet. Don't be fooled, she's not so sweet. Bhool Bhulaiyaa 2 releasing in cinemas on 20th May, 2022.”

Tabu's first look too was shared a few days ago along with a caption that read, "A devil or an angel? Or somewhere in between...Bhool Bhulaiyaa 2 releasing in cinemas on May, 20, 2022."

The first instalment of Bhool Bhulaiyaa features Akshay Kumar, Vidya Balan and Shiney Ahuja in lead roles. The 2007 film is a remake of the iconic 1993 Malayalam film Manichitrathazhu.  Bhool Bhulaiyaa 2 has been directed by Aneez Basmee and produced by Bhushan Kumar under the T-Series banner.