Bhediya Trailer: Varun Dhawan's Werewolf Is Both Funny And Dangerous

Film to release in Hindi, Tamil and Telugu on November 25 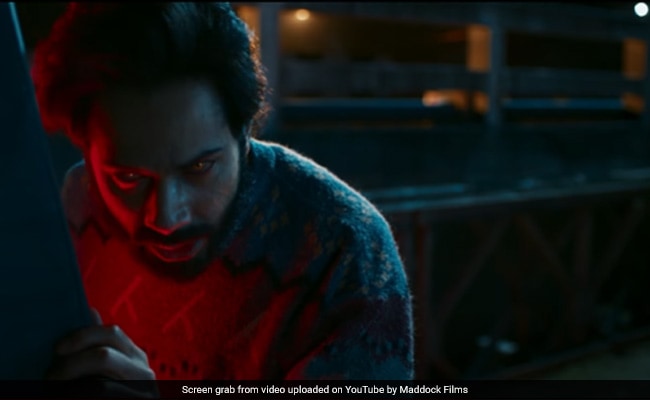 The makers of Varun Dhawan and Kriti Sanon's Bhediya released the film's trailer on Wednesday. The trailer, which is over-two-minutes long, starts with a long shot of a town somewhere in Himachal Pradesh, shifting to a frame where Varun Dhawan can be seen sleeping on a bed and a dialogue of him runs in the background, where he can be heard discussing a concern of his with Kriti Sanon. The trailer with a few frames and dialogues in the beginning, establishes the fact that Varun Dhawan is bitten by a wolf and his life is not the same after the incident.

Varun is heard saying, "Tumhe kya lagta hai iss bhediye ne mujhe hi kyu kata hai? (What do you think, why this wolf attacked me specifically?)," to which Kriti Sanon replies, "Ho sakta hai woh bhediya tumhe maarna chahta ho (Maybe that wolf actually wants to kill you)." Soon, we can see the scene, where Varun is being attacked by a wolf in the jungle. Varun's dialogue continues, "Mai hi kyu (why me)," to which Kriti replies, "Kyuki tum jise siyapa samajhte ho woh bahaut badi zimmedari hai (Because what you're calling trouble is actually a great responsibility)."

Then enters the characters of Deepak Dobriyal and Abhishek Banerjee, who come to visit their friend Varun Dhawan in the hospital after he's been attacked by the wolf. Turning his friend's pain into a joke, Abhishek Bannerjee is heard saying, "Mujhse toh dekha nai jaa raha hai (I cannot see this)", Kriti who is also in the scene, adds to it and says, "Mujhse bhi nai (Neither can I)." Abhishek continues, "Seb samajh kar c*** chaba dala mere bhai ka (It chewed up his bum like an apple)." Several such comic dialogues can be heard in between by Abhishek Banerjee, who adds up comedy to the ongoing horror in the trailer.

In the rest of the trailer, we can see how Varun Dhawan feels the changes in his body and discovers the powers of wolf in him, slowly changing into a werewolf in the night and wandering in the jungle. However, he is worried that he will become a threat to human beings due to his transformation. The trailer ends with Varun Dhawan trying to attack his friends Abhishek Banerjee and Deepak Dobriyal, who the next day confront him, while Jungle Book song Chaddi Pehan Ke Phool Khila Hai runs in the background.

The film, directed by Amar Kaushik, is written by Niren Bhatt and produced by Stree and Roohi producer Dinesh Vijan.

Bhediya is all set to release in theaters on November 25 in Hindi, Tamil and Telugu.