Ananya Panday And Sister Rysa In A Perfect Candid Pic 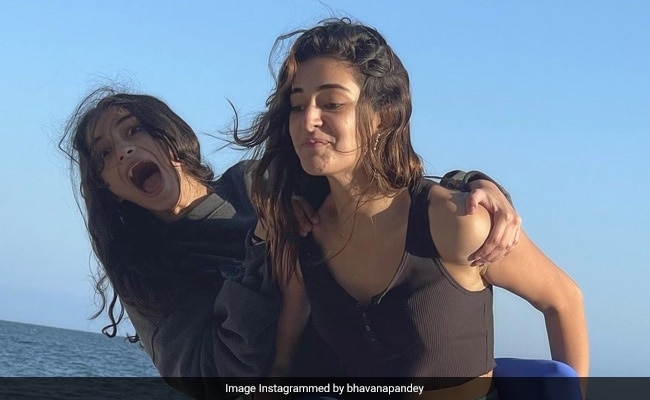 Bhavana Pandey is all about her family and her social media feed is proof. From videos of her children to images with her husband, actor Chunky Panday, the designer often shares glimpses of her life with followers on Instagram. Therefore, it is no surprise that fans of actress Ananya Panday often make a bee-line to her mother's account to catch some candid images of the lovely family. And fans were in for a treat on Friday when the doting mother shared a photo of her daughters. In the image, Bhavana's elder daughter Ananya is seen carrying sister Rsya on her back.

The two are seen enjoying the moment on a beach. Sharing the photo, Bhavana Pandey decided to not post a caption and let three rainbow emojis do all the talking. Reacting to the candid moment between the sisters, celebrity fitness expert and health coach, Deanne Panday wrote, "What a lovely photo," followed by a bunch of heart emojis. Deanne is married to Chunky Panday's brother, Chikki Panday.

A while back, Bhavana Pandey shared another image of the two sisters, this time with herself. The trio is seen chilling on a lawn in a casual avatar. In the caption, Bhavana Pandey hinted that Rysa is not fond of taking pictures. "Rysa, will keep forcing you for pictures," read the post. Reacting to this image, actress Neelam Kothari, who appeared alongside Bhavana Pandey on the Netflix show, Fabulous Lives Of Bollywood Wives, wrote, "Such a lovely picture."

In another cute throwback snap, we can see Bhavana Pandey and Ananya twinning in a pink ensemble and pigtails. "The days we wore colour-coordinated outfits and matched our hairstyles," she wrote in the side note.

Here are some other throwback pictures we bet you will love:

Ananya Panday made her Bollywood debut with Student Of The Year 2 in 2019, opposite Tiger Shroff and Tara Sutaria. She followed this up with roles in films such as Pati Patni Aur Woh and Khaali Peeli. Ananya will be seen next in an untitled Shakun Bhatra film with Deepika Padukone and Siddhant Chaturvedi as well as the multi-lingual movie Liger alongside Vijay Devarakonda.