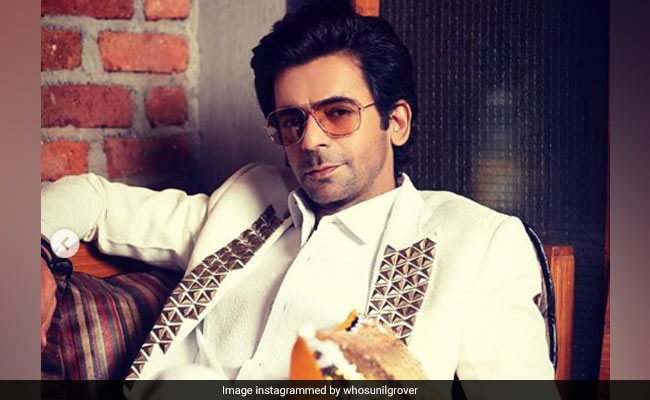 Actor Sunil Grover, loved as fictional characters Gutthi and Mashoor Gulati and who will be seen in the film Bharat, says he does not mind the tag of a 'comedian' as he believes a successful on-screen image always allows more opportunities to an artiste. In an interview with news agency IANS, Sunil said: "We all are typecast, especially when we get success by doing one thing. Whether you are an action hero, romantic hero or playing a comedy character, we all are typecast. In my career, since people have appreciated my performance on television for years, even casting directors trust that I am capable of delivering a comedy scene effortlessly."

"But I have also portrayed different characters in films. When I get an offer, instead of thinking of the genre, I look for the opportunity to perform. Because at the end of the day, I am a performer. Even when I do comedy, since I have no training in stand-up, I always approach a character like a character and not like a performer," said the actor, who first found recognition with the television show Comedy Circus.

Directed by Ali Abbas Zafar, the story of Bharat revolves around the journey of a character named Bharat, and it's set in 1947. Bharat is played by superstar Salman Khan in the movie, which also features Katrina Kaif.

A substantial part of the film was shot in Punjab. Sunil Grover says during the shooting, he really learned the art of saying 'no' to his relatives who were keen to get clicked with Salman.

"The moment my relatives got to know that Salman sir was coming to shoot a film in Punjab, I started getting calls and messages. All of them wanted to meet Salman sir and get pictures with him. Of course, it wasn't possible on a film set," he said.

Stating that Punjabis are emotional, Sunil said, "Friends and relatives would say, 'Acha beta, ab toh tu star ho gaya, isliye aise avoid kar raha hai (Now you are a star, so you are avoiding us)'. But only we actors know how hard it's on a film set because everything is scheduled."

"It literally taught me how to say 'no' to people in such a situation. I hope reading this, people will understand," he said with a smile.

Happy working in television shows and films simultaneously, Sunil says he gets a steady balance of offers from both mediums. "If I have several film offers, that won't allow me to get time for TV, I am happy with the roles that I have got," said the actor, who last appeared in Vishal Bhardwaj's Pataakha.

Bharat has given Sunil a chance to work with Salman for the first time. On his experience, Sunil said: "Well, he is a star. Whenever you look at him, there is an aura, a larger than life personality that he effortlessly carries."

"In the first glance, I felt a little intimidated. I was nervous. But I had to act well, and as an actor, I was focusing on my character. I play his childhood friend in the film. Obviously, I had no choice but feel free to act in that manner when the camera rolls. But Salman Khan is a star. From any angle, any point of time you look at him, you see a star," he further said.

(Except for the headline, this story has not been edited by NDTV staff and is published from a syndicated feed.)
Comments
bharatsunil groverkatrina kaif