"Better Luck Next Time Brian": Anil Kapoor On Family Guy Is As Jhakaas As In Real Life 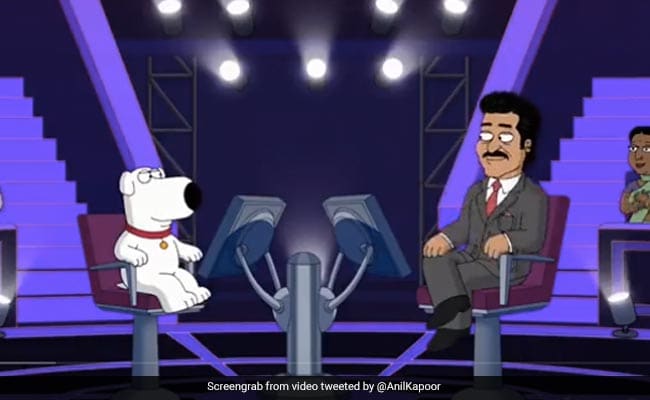 Anil Kapoor summed up his TGIF mood with a tweet about Family Guy and it's hilarious. The 64-year-old actor, who featured on an episode of the American sitcom in 2016, sliced out a portion from the episode and shared it on Twitter. Anil Kapoor kept his tweet short and crisp, telling Family Guy's Brian Griffin, an animated Labrador: "Better luck next time." Those who may have missed the episode from 2016, here's some context. Brian participated on an episode of Kaun Banega Crorepati in the episode named Road To India. An animated version of Anil Kapoor hosted the show, asking Brian a question about Indian cricketers.

After things didn't go as anticipated, Brian lost the round and the prize money, which he was trying to win for his ladylove Padma:

Anil Kapoor, who flew to Los Angeles for dubbing for his Family Guy episode, had shared multiple posts about being "super excited" to be on the show:

Stepping into the world of Family Guy #SuperExcited to be a part of the lovably crazy Griffin family @FamilyGuyonFOXpic.twitter.com/vH0qOaLmlq

Ahead of his Family Guy stint, Anil Kapoor featured as a show regular on the series 24, both in Hollywood, and back home in India. Anil Kapoor also featured on the British show Oasis, in the pilot episode.

Everything You Need To Know About Squid Game, South Korea's Latest Cultural Phenomenon