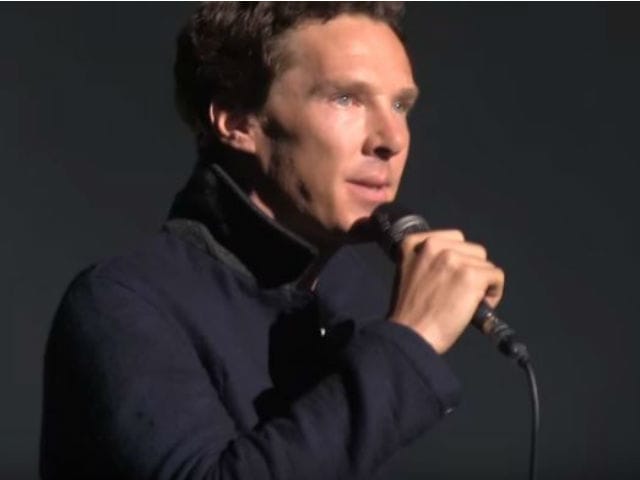 Benedict Cumberbatch in a still from the video posted by DavidGilmour

Washington DC: David Gilmour fans at Royal Albert Hall in London were taken aback, in a good way, when Sherlock star, Benedict Cumberbatch decided to hop on the stage to debut his singing skills.

Most fans of the actor might have missed the incredible moment but luckily, concertgoers did not waste any time to share, on social media, the captured performance on their phones.

True to his astounding characters in his movies including the likes of The Imitation Game and Doctor Strange, Benedict is steadily showing the world his hidden talents time after time.

When the Star Trek Into Darkness actor is not hitting some notes in front of thousands on stage, he is asking the hard-hitting questions to fellow Hollywood stars.

The Black Mass star recently bombed fellow British star Tom Hiddleston with questions in an issue of a celebrity magazine, 'Interview,' which publishes conversations between some of the most creative minds from the worlds of fashion, art and entertainment.

In the conversation with The Night Manager actor touched on a number of topics, including one that Benedict could not ignore-his ex-girlfriend, Taylor Swift.

"There's another weight of us being in the public eye, which is this presumption that, because your work and your promotion work is very public, your private life should be, too. And, without getting into a huge debate, I just want to say that I'm not going to ask questions about my friend's personal life just because there are unsolicited photographs of him and a certain someone, in a relationship or together," he said.

Promoted
Listen to the latest songs, only on JioSaavn.com
However, after a certain pause, Tom dropped the topic saying, "I'm not going to get into that. So that door is closed, dear reader."