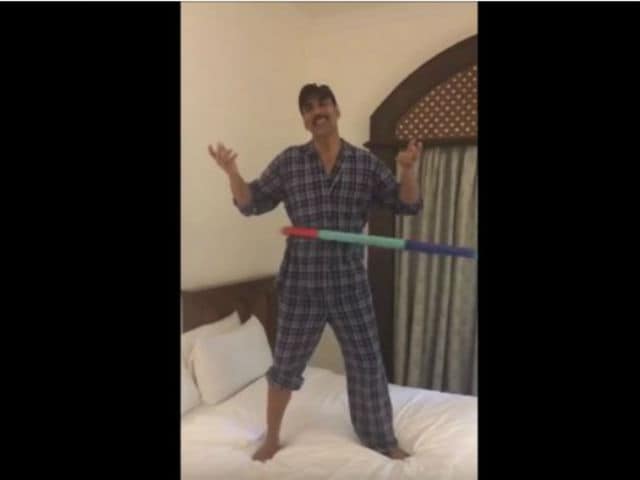 Akshay Kumar in a still from the video

New Delhi: The very talented Akshay Kumar stars in a fabulously epic video in which he thanks the Bollywood contingent who promoted his film Rustom in a series of videos - and he does it singing while also hula-hooping.

Akshay posted the video on his social accounts. On Twitter, he wrote "Lot of love inside this hoop."

A disclaimer at the start specifies that everyone Akshay mentions is a 'superstar' - can't argue with that since the list includes the likes of Salman Khan.

"Mere liye jisne jo bhi kiya, unhe thank you thank you shukriya," trills Akshay, 48. He continues in this vein, including shout-outs to the upcoming films of some of the actors on the list - Salman's Tubelight, Ranveer Singh's Befikre, Sonakshi Sinha's Akira and Badrinath Ki Dulhania, starring Alia Bhatt and Varun Dhawan.

He also thanks his fans. It's pretty damn hilarious. So hilarious that it's well on its way to viral fame, with over a lakh views within an hour on Facebook.


The stars thanked were thrilled. Ranveer acknowledged the out-Ranveering, tweeting: "Sir! Best video ever!" Sonakshi, Akshay's co-star in films like Holiday, tweeted, "Too much lolz."

It's true that Akshay has a lot to thank his colleagues for. In the run up to Rustom, which released last Friday, Sidharth Malhotra, Fawad Khan, Karan Johar and the actors aforementioned posted a series of video messages counting down to Akshay's film and urging folks to go watch it.

Here are Salman, Ranveer and Alia:

Rustom, based on the Nanavati case and co-starring Ileana D'Cruz, opened to middling reviews but impressive box office business. It could collect the quickest 100 crores of any Akshay Kumar film, according to reports.

"Time Now For A Trim And To Get Back To Work": Shah Rukh Khan In New Post