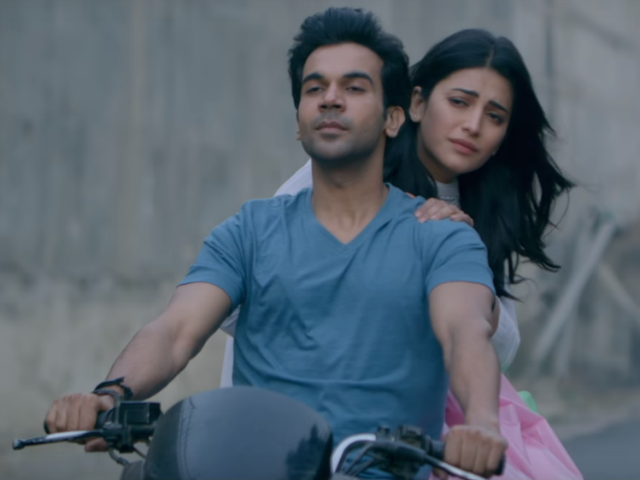 A still from Behen Hogi Teri

New Delhi: Rajkummar Rao and Shruti Haasan's film Behen Hogi Teri is all set to release in theatres tomorrow. The film, directed by Ajay K Pannalal, shows how it feels to be bro-zoned by the girl you have been in love with since childhood. Behen Hogi Teri is set in Lucknow. In the film, Rajkummar Rao portrays the role of a middle class boy, Gattu, who is madly in love with a neighbourhood girl Binny Arora, played by Shruti Haasan. Gattu makes crazy efforts to woo Binny. He is fighting the society perception that 'mohalle ki ladkiyan maa-behen hoti hain' and fears that Binny will make him her bhai.

The trailer of Behen Hogi Teri, which was released by the makers of the film on May 2, shows how Binny time and again threatens Gattu- "Aaj rakhi bandh ke tera the end karti hun." Confusion takes place in the film when Gattu sees Binny on a bike with his friend and begins to keep an eye on her.


Shruti Haasan was recently fat-shamed after she gained eight kilos for Behen Hogi Teri. In an interview to mid-day the 31-year-old actress warned off body-shamers, saying that how she chooses to look is 'nobody's business.'

"Given the family and background that my character Binny Arora comes from, it was essential that she look fuller. Thankfully, gaining weight paid off, given the amazing response our trailer received," Shruti Haasan told mid-day.

Promoted
Listen to the latest songs, only on JioSaavn.com
Behen Hogi Teri also co-stars Bigg Boss 8 winner Gautam Gulati, Darshan Jariwala, Gulshan Grover and Ranjit. The film was earlier scheduled to release in theatres on June 2. However, its release date was postponed as it was clashing at the box office with two Hollywood big releases - Priyanka Chopra's Baywatch and Gal Gadot's Wonder Woman.

Tahira Kashyap, Who Got Bruises During A "Heroic" Deed, Is Grateful To Her 69 Kilos