John Abraham, who plays the role of decorated cop in Batla House, tweeted: "Was the nation prejudiced or was it really a fake encounter?" 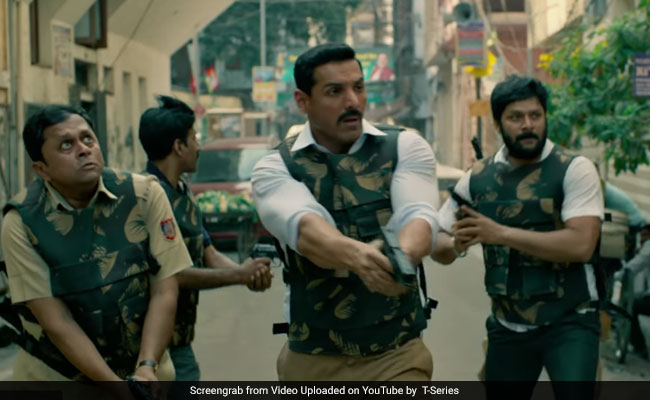 Actor John Abraham dropped the much-awaited trailer of Batla House, his upcoming film on the controversial Batla House encounter of 2008. John Abraham, who plays the role of decorated cop Sanjeev Kumar Yadav in Batla House, tweeted: "Was the nation prejudiced or was it really a fake encounter? The questions will finally be answered?" The trailer begins with intriguing glimpses of the encounter with one of John's fellow cops being shot in the gun battle. Then it swiftly moves on to controversy that followed. The Batla House Encounter, also referred to as "Operation Batla House", was conducted in Delhi's Jamia Milia locality in September 2008, in which two suspected terrorists were killed and two more suspects were arrested.

Was the nation prejudiced or was it really a fake encounter? The questions will finally be answered. #BatlaHouseTrailer out now.https://t.co/uT61yAzzqo@mrunal0801@ravikishann@nikkhiladvani@writish@TSeries@EmmayEntertain@johnabrahament@bakemycakefilms

The trailer shows a determined John Abraham holding his guard as the investigating committee grilled him during several interrogations following the encounter. "They were students," he said at one point but added: "I didn't say they were innocent, I said they were students."

The trailer also offers glimpses of how John Abraham doesn't deviate from his version of the truth as he is faced with threats such as losing his job or even his loved ones. However, one scene features John Abraham being honoured with the President's Medal for his contribution in the Batla House encounter. One of the talked-about scenes from the trailer is when John Abraham, determined to do his duty to the country, crushes a mobile with his bare hand.

Directed by Nikkhil Advani, Batla House releases on August 15 this year, when it will have a box office collision with Akshay Kumar's Mission Mangal. John Abraham co-stars with Mrunal Thakur in the movie. Netflix's Sacred Games also releases on the day.