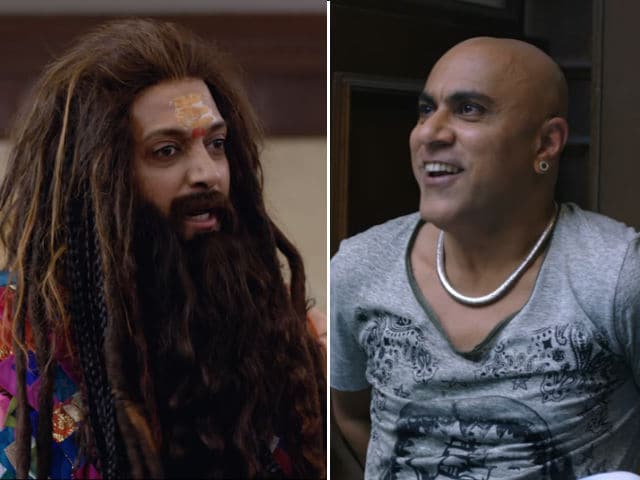 New Delhi: Riteish Deshmukh and Vivek Oberoi's upcoming film Bank Chor promises to be a laugh riot. The film's trailer released on Tuesday and it will ensure you laugh till the very end. Riteish Deshmukh, Vikram Thapa and Bhuvan Arora are three small time thieves who decide to rob a bank. Enter inspector Amjad Khan (played by Vivek Oberoi), who is suave and promises to get to root of the matter in no time because he suspects that this isn't a case of 'simple robbery.' This is the crux of the plot, which may not seem as promising, but the craft with which it has been put together deserves a round of applause.

The trailer starts with a reference to Dhoom trilogy (Bank Chor is produced by Yash Raj Film's subsidy Y-Films) and then moves over to Riteish's entry. He is dressed as a sadhu and has abbreviations for things like - Ganpati Bappa Moriya, Let's Rock (a slight twist of Himesh Reshammiya's popular chant on 'Jai Mata Di, Let's Rock'). Riteish's comic timing is impeccable coupled with some hilarious one-liners. Example, a bank employee says, "You're in the wrong bank," Riteish replies, "Kyun, ye Vicky Donor wala bank hai?"

All this aside, welcome Baba Sehgal. Riteish and company suspect he is Amjad Khan's man. Therefore, Baba Sehgal introduces himself as: "Main to rapper hu," and gave an example: "Lips hai tere lal, Kaale hai tere baal/pehle aaya Anna, baad me Kejriwal." If you follow Baba Sehgal on Twitter, you'd know this is one of his many funny couplets. PS: Baba Sehgal's also contributed in scoring the film's music.

Promoted
Listen to the latest songs, only on JioSaavn.com
Meanwhile, celebs who liked the trailer of Bank Chor tweeted:

Bank Choralso stars Rhea Chakraborty and is directed by Bumpy. The film is produced by Y-Films' Ashish Patil and YRF's Aditya Chopra. The film is releasing on June 16.